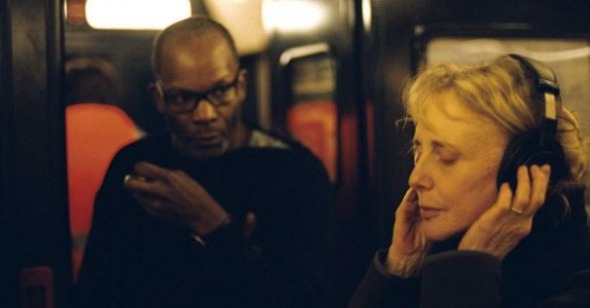 On the Nightshift:
An Interview with Claire Denis
By Adam Nayman

Reverse Shot: A lot of writers have already noted the similarities between the narrative of 35 Shots of Rum and Ozu’s Late Spring. Do you think that Ozu is a good place to start?

Claire Denis: Of course. He was the blueprint for this film. It is homage, for sure.

RS: But maybe not as explicit an homage as Hou Hsiao-hsien’s film Café Lumiere…

CD: Actually, I do think it is as explicit. But the difference is that, with Café Lumiere, [Hou] was asked to create an homage to Ozu. Nobody asked me to do this, but I did it because this film is also the story of my mother and my grandfather, which is a story I know very well. I like any Ozu film, of course, but Late Spring is very personal for me, very close to that relationship between my mother and my grandfather. I took my mother once to an Ozu retrospective to see Late Spring, and she thought it was beautiful—she said “I didn’t know you could make a film with such a simple story.” So I made up my mind. I wanted to make that film for her.

RS: You call it a “simple story,” and 35 Shots of Rum is simpler and maybe more straightforward than L’Intrus. Was this film a reaction to the last one?

CD: Not really. I thought it was time for me to make this movie now because my mother was getting older, and also because Alex Descas is getting older. Ten years ago, he was too young to play this part—now was the right time. And I would not make the film without him. I think that Alex Descas always has a past, don’t you? It’s like he brings an inside story to his characters.

RS: You could say the same thing about Michel Subor or Denis Lavant. You seem to have a fondness for actors who are able to suggest interior life, who are able to act with their bodies and faces, and to communicate without dialogue.

CD: Yes, though it’s not because I don’t like dialogue. But with these actors—and with Lionel and Josephine in 35 Shots of Rum—something exists between the lines. What these two people are talking about is not useful for the story. They talk about tomatoes, about making a salad.

RS: 35 Shots of Rum reminded me of several of your other films in that it shows Paris as a city divided up into a number of smaller, subcultural communities. Alex’s fellow bus drivers are all Caribbean, for example.

CD: I see Paris like that. I like to show the city the way it is. A lot of French films, when they show Paris, it doesn’t look the way I see it.

RS: Do you think that the filmmakers are seduced by an idea of a Paris that doesn’t really exist?

CD: Yes, and sometimes I also like the idea of a Paris that doesn’t exist. But I hate seeing a Paris that is just abstractly French, like it was at the beginning of the twentieth century. So many things have changed.

RS: What you say makes me think of the scene in Trouble Every Day where the maid stretches out in the Americans’ hotel room and there’s this lampshade with a picture of the Eiffel tower—it’s like she’s become a tourist in her own city. She’s in the real Paris and the unreal Paris at the same time.

CD: When I go to New York, I’m not in the real New York: I’m in an imaginary place from photos and films. The minimum a film can do is to leave the trace of a city or a place, or the way that people live. I always keep that in mind when I make a film.

RS: With that in mind, 35 Shots of Rum strikes a balance between naturalism and impressionism—Paris as it is and how others see it. I’m thinking of the shots of the apartment building at night. It’s the City of Lights, but each room has a different shade. Can you talk about how you and Agnès Godard devised the visual scheme for this film, which is very painterly and composed but also features a fair amount of bobbing, handheld camerawork?

CD: I always scout locations first. The apartments, the railway tracks, the café, the canal—I figure out the geography of the film. Then Agnès and I go together to look around, and when we’re done we always decide on the simplest thing. Every image is about subjectivity. When we are on the train, we are inside the subjectivity of the driver. In the building, it’s the subjectivity of the people who live there. It’s easy to work with Agnès, because she understands what I want. Sometimes, we’re able to get that subjective quality by using a handheld camera.

RS: After watching your dance documentary Vers Mathilde, I wonder how much you see your own work as being like that of a choreographer. The scene in 35 Shots of Rum where the characters dance with each other in the restaurant is less about camera movement than the movement of bodies within the frame, and within a long take. Was this scene difficult to shoot?

CD: No, not at all. I had to find the right place first—a small African restaurant. It had to be small, but it had to offer enough circulation. After that, it wasn’t difficult. We did it in two nights.

RS: The scene builds so slowly…

CD: Yes. They’re all wet, they want to go home, but also they don’t because they’re all very sad. Then the music starts, and they stay, and it’s all just like one movement.

RS: It’s like they’re forced to stay by the song that comes on—“Nightshift” by the Commodores. I’ve never heard it used in a movie.

CD: Nobody could ignore a song like that. It’s so beautiful.

RS: Your soundtracks are always very eclectic. How much music do you listen to?

CD: I’m an anxious person. What I like best is to smoke cigarettes and listen to music. A perfect day for me is a day with coffee, cigarettes, and music, to quote Jim Jarmusch.

RS: To stay on music for a moment, I think 35 Shots of Rum is the fifth time that you’ve had a score by Stuart Staples and Tindersticks. It’s very different from the rest.

CD: I think Stuart became French. When I heard the first piece, I said, “When did you become French?” I never ask Stuart to do this or that. He reads the script, he’s invited to see some dailies and that’s all. He told me he liked the story of this father and daughter, and that he liked trains. He said, “Maybe I won’t use a guitar,” but I thought that with all the shots of trains and tunnels that a guitar would be like the brakes of the train, shrieking. And then he was very happy to use the guitar.

RS: You call the film a story about a father and a daughter, and obviously Lionel and Josephine’s relationship is extremely intimate. In fact, it struck me and some of the people I saw the film with as unusually so, and I was wondering if this sense of closeness derives in any way from what you’ve observed in people who’ve come to France from somewhere else—if it has to do with a different culture.

CD: No, not at all. I don’t think it is a subcultural thing for Caribbean people. It’s specific to these characters in the film, and it’s very much like my grandfather and my mother. He had lost his wife when my mother was a baby, and he sort of panicked that he wouldn’t be strong enough to raise a girl. So he became the best man that he could for her. My mother knew that she had a very special father. They were almost like a couple. They felt responsible for each other. She knew that it wasn’t normal, that she couldn’t compare herself to her friends. And she was afraid as she got older because she kept comparing boyfriends to him. My mother is eighty now. She was married, had children, had a family . . . but still in her mind her father is still like a prince to her.

RS: Did you know your grandfather well?

CD: He died when I was twelve, but I knew him. He was great. He would ride a motorbike. He was very strange, very instructive.

RS: You mention a motorbike: there’s that beautiful moment in 35 Shots of Rum where Josephine is riding with Lionel, and she clasps her hands around him. I guess you think Alex Descas looks good on motorbikes, since you also put him on one in Trouble Every Day.

CD: You know that in Paris, most working-class people have motorbikes because of the traffic . . .

RS: Later in the film, when Lionel and Josephine take the van to Germany, their domestic routine continues even though they’re no longer in the apartment . . . she’s still washing dishes and it’s like they’re in a little moving house. It’s cozy, but you also get the feeling that it has to change. And then is the shot of the two rice cookers at the end. Not that it has to end, but it has to change, that there needs to be some sort of separation? Is that bound up in the image of the two rice cookers at the end?

CD: Yes, but what happens after that is a question mark. Probably the other guy, the student, was the perfect guy for Josephine, but she chooses her neighbor [Grégoire Colin], because she thinks he will take her far away. I don’t know.

RS: I want to ask about another specific thing: Lionel’s story about the 35 shots of rum, which of course is the title. Is that based on something real, on something that you had heard?

CD: It’s a story we made up. Lionel had made a bet that by the time his daughter got married, he would know he had done a good job as a father and he would able to drink [that much] rum. The number 35 is completely arbitrary. I decided not to shoot the scene where he explains to Gabrielle what it was all about. I thought that it was boring.

RS: I have heard that you are finishing another film in Cameroon?

CD: Yes, it is with Isabelle Huppert, Christopher Lambert, and Isaach De Bankolé.

RS: Isaach De Bankolé is another actor you’ve worked with before, and we talked about Agnès Godard and Stuart Staples . . . do you take comfort in having these frequent collaborators?

CD: It’s not always easy to work with them, because I’m always afraid to hurt them. When you know somebody you can’t use them as tools. They inspire me. With Isabelle, it was the first time we worked together, but it was like we had always been together. It was strange to be so close to her, and to like her so much. I’m not a very sociable person, but even on the first day of shooting it was like something we had done before.

RS: Is there any chance that you would make another dance film like Vers Mathilde? Maybe not with Mathilde Monnier, but with another group like hers?

CD: You know, maybe there is a project I would like to do. With Mathilde, and also with Isabelle Huppert, together.