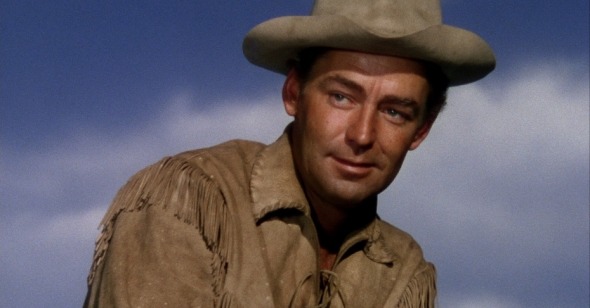 Don’t Fence Me In
Adam Nayman on Shane

It’s one of the finer ironies in Hollywood history that Alan Ladd was cast in the title role of George Stevens’s 1953 Western Shane, since Jack Schaefer’s 1949 novel called for a man with a long shadow—someone who could cut a mythic figure against the peaky Wyoming landscape. But long before Sylvester Stallone and Tom Cruise took their licks for being relatively diminutive matinee idols, the Arkansas-born Ladd was a Hollywood punch-line for the gap between his hard-edged screen persona—“the killer as cold angel,” in the words of David Thomson—and his pint-sized height of five feet, five inches.

A former studio carpenter who was turned down for a contract by Universal for being too short, Ladd found a niche on radio, where his commanding voice never betrayed his small stature; his breakthrough in the movies came starring opposite Veronica Lake as a hit man in the lean 1942 Paramount noir This Gun for Hire. (The fact that Lake was only 5’1” surely helped his credibility as a romantic foil.) From there, the stories about directors finding ways to disguise Ladd’s shortness have become the stuff of legend, with Raoul Walsh convincing Hugh O’ Brian to stand in a six-inch ditch so as not to laughably dwarf his co-star in Saskatchewan.

Stevens’s original choice for the role of Shane was Montgomery Clift, no giant himself at 5’10”. In Michael F. Blake’s invaluable Code of Honor: The Making of Three Great American Westerns, there is an anecdote about the director marking up his copy of the novel with a note reading “Monty will have to muscle up for this.” But Ladd was under contract to Paramount, and after some consultation with the costume department about the visual effects of dressing such a small man in all-black-everything —“black absorbs the light and contracts the figure”—the decision was made to cloak Shane in buckskin and loose him on the frontier, where he would hopefully look more like a hero than a speck.

Stevens filmed Shane in the old 1.37:1 Academy ratio, a format standardized in 1932 and applied to the entire first wave of old Hollywood Westerns, from big-studio fare to thriftily produced B-movies. The squared-off shape of the Academy ratio became part of the visual language of the drama, with an emphasis on verticality—in 1.37:1, mountains loomed even higher above the plain, while the constrained field of vision made ambushes that much more plausible. Even a Western as majestic as Howard Hawks’s Red River (1948), with its epic cattle stampede sequence, feels hemmed in as a result, while the difference in the look and feel of Monument Valley in John Ford’s My Darling Clementine (1946) and subsequent The Searchers (1956) is palpable beyond the switch from black-and-white to color—the latter’s wide, high-resolution VistaVision frame transforms the same spectacularly barren location from a mere backdrop into a sprawling canvas.

Like The Searchers, Shane’s place in film history is secure: its tale of a lone rider who protects a fledgling community from greedy evildoers before slumping off into the sunset cuts two ways—as a grand summation of all the Westerns that came in the half-century before its release and as a wellspring of inspiration for several generations of revisionists from Sergio Leone and Sam Peckinpah to, um, Ron Underwood who cast its malevolent trigger-happy antagonist Jack Palance in a winking extended cameo in City Slickers (1991) and scored the old codger the best supporting actor Oscar that he’d lost the first time around. “The Purest Western of All” is the verdict of Edward Countryman and Evonne von Heussen-Countryman in their 1999 BFI monograph, which ably interrogates the film’s themes—the fetishization of masculinity implicit in the fixation of young Joey (Brandon De Wilde) on the new gun-toting grown-up in his midst and the gulf between noble isolate Shane and the society that needs him but cannot integrate him—and covers its reception without addressing the most significant detail of its theatrical release: that Paramount used the film to test out a new flat-widescreen projection format en route to rewriting their in-house aspect ratio a year later.

So when Shane premiered in the spring of 1953 at Radio City Music Hall in New York City, it was on the venue’s newly resized screen, which encompassed 1500 square feet—nearly twice the total space of the previous screen, which measured 850 feet all told. This switch, combined with changes to the theater’s film projector and its lens, meant that Shane was shown in an aspect ratio of 1.66:1—supposedly over the objections of the director, who had not composed his images with this exhibition makeover in mind. The culprit in all this was, of course, television, which had begun to threaten the supremacy of the big-screen in more ways than one. Not only did television programming provide a cheaper and easier alternative to a night out at the movies, but the gradual willingness of the major studios to sell off parts of their old back catalogues to broadcasters meant that audiences were growing used to smaller-scale images.

In an attempt to fight back against this pernicious influence—to insist that size does matter, as the saying goes—some studios (including Paramount) insisted on widescreen exhibition even before they had properly developed widescreen camera technology. It’s merely a matter of circumstance that Shane was the first movie to get stretched out against its will, but it gives the film a double place in both film history and more specifically the history of the Western, as a movie widely regarded to be a thoroughbred of its genre was also a kind of guinea pig. And the man who bore the brunt of this experiment on his (slender) shoulders was Alan Ladd. For while he was now standing front and center on a screen as big as all outdoors, the cropped-off image took him down yet another notch—the visual equivalent of cutting a guy off at the knees.

So Shane is enshrined as the first widescreen film of the modern era (beating out The Robe and its CinemaScope format by a few months), and yet for successive generations of cinephiles (this one included) the film has only been available in Academy Ratio: television prints and home video editions reverted back to 1.37:1—a case of “no harm, no foul” that probably had more to do with the 4:3 configurations of most commercial televisions than any reverence over George Stevens’s intentions. The Internet kerfuffle in 2013 over Warner Home Video’s planned widescreen Blu-ray of Shane—with Ground Zero located, as it so often seems to be, at the blog Hollywood Elsewhere—brought the whole sixty-year-old saga into the light. And while the right decision was ultimately made and the disc was released in Academy Ratio only, the question of the theatrical version of Shane—the one that garnered it six Academy Award nominations and an Oscar for best cinematography (by Loyal Griggs) and helped earn it its beloved-classic status—remains open, save for the extra of a brief theatrical trailer framed in 1:66:1.

One of the reasons that Shane was chosen as the forerunner for widescreen projection was its abundance of long shots, which were themselves byproducts of an accelerated shooting schedule dictated by Paramount’s financial troubles (the director’s tendency to “work slow” was a sticking point throughout production). Stevens was peerless with close-ups—think of the scene in A Place in the Sun when Elizabeth Taylor whispers to Montgomery Clift, “Tell mama all,” with the camera dancing cheek-to-cheek, or James Dean’s face filling the frame at crucial moments in Giant. And yet Shane has many long stretches without a single close-up. Stevens prefers to shoot his characters at a bit of a remove, which helps to establish certain visual ideas like the looming group presence of the cattle rustlers led by Rufus Ryker (Emile Meyer) but also leads to some curiously indistinct supporting characterizations—even an actor as bug-eyed and vivid as Elisha Cook Jr., as a doomed Confederate homesteader, is a muted presence.

Even without the ersatz widescreen frame, the long shots aren’t very flattering to Ladd: when Shane takes a knee before teaching Joey how to shoot, the intended avuncular aspect of the gesture is undermined by the fact that he doesn’t seem that much bigger than his pre-teen pal even when he’s at his full height. It’s curious to note that Stevens and Griggs didn’t even use low angles all that often—the way that directors did on Ladd’s other pictures, or as in a lot of movies featuring Cruise and Stallone—which again could have something to do with the rushed production. But even if the camera mostly stays at a distance, the images have a dynamic sophistication. When Palance’s Jack Wilson shoots Cook’s character (after verbally trashing his namesake Stonewall Jackson), he’s standing on a saloon porch and towers over his quarry—the combination of Palance’s lanky figure and the character’s elevated position turn him into a monolithic presence even though the shot is framed more or less at eye level. Throughout Shane, Stevens is more apt to cut out than to pull in, and the quality of the film’s editing (by William Hornbeck and Tom McAdoo) is remarkable—not only in such famously staccato sequences as the stump-cutting pas de deux between Shane and Joe Starrett (Van Heflin), or the pair’s tag-team demolition of Ryker’s crew at their one-horse town’s bar, but also in joining together so many long shots without sacrificing spatial coherence.

The desperate affection displayed by Joey for Shane has led to Stevens’s film being described as one of the most emotional of the vintage Westerns, right down to its conscientiously tear-jerking ending, which puts a twist on the familiar trope of the hero riding out of town by suggesting that he’s actually dead, slumped over his horse and thus deaf to the cries demanding his return. (Clint Eastwood loved this idea so much that he inverted it in Pale Rider, where the lone gunmen who arrives at the beginning is already a corpse—an exterminating angel exorcising the sins of his past life while leaving a fresh body count in his wake.) And yet the distanced quality of Stevens’s mise-en-scène has a complicating effect on the machinations of the plot. It gives Shane a formal quality that positions it as a myth rather than unspooling it as a yarn. This may seem like a fine distinction, but the disparity between little Brandon De Wilde’s wet-eyed mewling and Stevens’s stately framing generates a tension even more interestingly unresolved than the main character’s fate. If the unnatural and economically motivated elongation of Shane’s aspect ratio hinted at the impending future of film exhibition, then Joey’s cries take on an extra ring of futility: they’re like an elegy for an old-fashioned, foursquare format limping off into the sunset.