Best of the Decade #3: In the Mood for Love 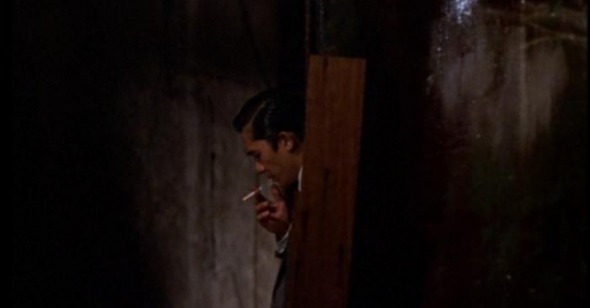 The twenty best films of the last decade were determined by polling all the major and continuing contributors to Reverse Shot in the publication's history.

A man and a woman passing each other on a dark stairwell; the same man and woman trapped in a bedroom together, chastely waiting for a marathon mah-jong game to expire so they can separate without provoking unearned suspicion; the same man and woman walking down a cobblestone street pretending to be another man and woman, pretending to be in love, pretending not to be in love. These are some of the more vivid memories of Wong Kar-wai’s In the Mood for Love I’ve carried around since first viewing it almost nine years ago. It has remained one of the most shattering moviegoing experiences of my life. In my recollection, and that of many others, the film is the consummate tale of unconsummated love.

But now, revisiting the film after several years, this memory doesn’t fully match with what I see before me. It’s not that In the Mood for Love is any less heartbreaking than I remember it being. I’m as shattered watching it today as I was the first time. Yet the nature of the film’s central relationship is more ambiguous (and perverse) than I’d recalled, and the society within which it suffers doesn’t seem nearly as repressive. In memory I’d reduced the film to its essentials, which, as it happens, is similar to what Wong does within this mother of all memory machines. I remembered thwarted romance drenched in primary colors; in turn, Wong approaches the era of his young parents as a love song (full of escalating sentiments and looping refrains) to glamorous, corseted passions. In each case memories willfully simplify larger, more complicated truths at the margins. Missed opportunities, ill-timed ambivalence, vanity, cowardice—these are made tolerable through refractions of nostalgia. What I hadn’t fully realized about In the Mood for Love was the extent to which Wong fringes his devastating beauty with self-critique. Glamorizing the past is another feeble attempt at controlling what can’t be controlled, yet it’s a human impulse that’s as reliable as heartbreak. I can think of no movie that better or more elegantly embodies this futility than In the Mood for Love. By its very design it only cuts deeper as it ages—and as I age.

“That era has passed. Nothing that belonged to it exists anymore.” With that title card, coming near the film’s conclusion, Wong fast-forwards from principal action in 1963 Hong Kong to 1966 Cambodia, where shots of ancient ruins imply that the society we had been watching for most of the film was already as ancient. Perhaps, but the sentiment really has less to do with objective moments in history than with vanishing points in life. Memories, especially of love, grow mythic over time—achieving a quality that’s both vague and precise, diffuse and saturated, ineffable and fetishistic—just as Wong’s conception of the early Sixties era of his parents is mythic. But as with Mad Men, another early Sixties time capsule, the flower-printed past still resembles a reality we live in, weighted by perennials of loneliness and regret.

Mrs. Chan (Maggie Cheung) works for a travel agency, yet she’s grounded, constitutionally incapable of flight. Mr. Chow (Tony Leung) is a mess of contradictions. His career as a sedentary, patient typesetter is contrasted by the newsroom’s hectic transience, and his droopy resignation hides the ambitions of a closet writer. They’re both comfortably, if not happily, repressed, content within restrictions even as they rebel against them, and they adhere to dated moral codes even as the culture subtly changes around them. Though it may feel like it, they are surely not imprisoned by the time and culture of early Sixties Hong Kong. After all, infidelity is everywhere they look. Mr. Chow’s co-worker visits prostitutes and hits on anything in heels. Mrs. Chan procures two sets of gifts for her boss: one for his wife and another for his lover. And not only are their spouses cheating on them, they’re doing so with each other—a realization that both brings them together and, wedded as they are to a cuckolded position of moral superiority, keeps them apart.

Although her nosey landlord chastises her for going out too often and coming home too late, it’s Mrs. Chan’s own shame impulse that calls forth guilt and terror, not some societal-level threat. Her identity is largely formed by propriety and self-abnegation, from her meticulous manners to unfailingly formal attire (“She dresses like that to go out for noodles?” whispers a neighbor). She suffers, but like a masochist she also derives pleasure from that suffering. She’s beautiful in her misery, and that’s at least part of her allure to Mr. Chow. Consummating their desires could break that spell, something of which she’s at least unconsciously aware. Once Mr. Chow confesses his love, Mrs. Chan’s masochism transforms into sadism.

“You won’t leave your husband,” he says. “So I’d rather go away.”
“I didn’t think you’d fall in love with me.”
“Feelings creep up just like that. I thought I was in control.”

They’d wished to transcend desire, to “not be like” their weak, immoral spouses, but here he ditches that narrative. He went from policing his feelings to copping to them. But she sticks to the self-sacrificial storyline. When she visits him at a hotel room, a supposed writing retreat clearly meant to give discretionary cover for an affair, she mixes her signals.

“I didn’t think you’d come,” he says.
“We won’t be like them,” she responds, a non sequitur that puts the genie, painstakingly summoned, right back in bottle.

Freer in fantasy, her desires are safely expressed only within role-play. In another time or place, Mrs. Chan might have secretly stashed stilettos and subscribed to John Willie’s “Bizarre.” They come together to acknowledge their spouses’ infidelity, their shared cuckoldry. “I wonder how it began,” she says, and their walk home veers into playacting. Along an alleyway that resembles, and is lit like, a studio set, they perform scenes. He makes an aggressive move, grabbing her wrist. She recoils and breaks character—it’s not something her husband (who she’d called a smooth talker) would do. They try again, and this time she flirts with him, running a finger along his tie. But each take ends in tears, with her running to the bars of a window. Her safe zone is a prison.

Nearly every shot is framed, refracted, bisected. Mrs. Chan and Mr. Chow are distanced from themselves, each other, us. But the camera is still active, hanging back in realistic remove before tracking and panning in languorous slow motion. Two different cinematographers are at work—Christopher Doyle and longtime Hou Hsiao-hsien DP Mark Ling Ping-bin—but their styles play as two sides of the same dream. All of the images burn, then all too quickly expire. The most seemingly distanced shots reveal emotions at their most raw. The camera slowly pans back and forth behind them as they face a three-part mirror, each acting out the other’s marriage and break-up, sublimating their own affair, and yet the reflection hints at intimacy, domesticity. Faced away from us, their bodies seem slacker, more at ease despite the artifice, despite the starched, stiff clothing, despite their reluctance to even face each other. External music even keeps us from hearing them, granting them this passing grace while limiting our access to it. But even a hint of joy is enough to come crashing through the screen as ecstasy. She sings, and he claps out a beat for her.

Did Mr. Chow and Mrs. Chan actually consummate their affair? I now think so. On one particular night, after an exhausting charade in which they pretend to be their philandering spouses, Mrs. Chan rests her head on Mr. Chow’s shoulder in the back of a cab and says, “I don’t want to go home tonight.” It’s hard to miss the implication here, even if it comes within a playacting session. Whatever follows is fully elided, but rather than teases, Wong’s ellipses are essential. Whether or not Mr. Chow and Mrs. Chan slept with each other once, repeatedly, or at all is less important than the fact that they separated, that they forsook a chance at love and shared happiness, and that they were haunted by these events. The lost loves, the missed opportunities—these linger and take on weight as memories. And time conspires to put distance between where we are and what once was, or was close. Wong keeps the camera and the viewer at different points of remove—refusing establishing shots, tucking us around corners or behind doorways, keeping us from seeing expressions in full, keeping the characters laced, zipped, bunned, pomaded behind smokescreen. Time strengthens and fixates on barriers, and is the most intractable one of all.

Memories nest inside of memories, and then blend together. He invites her for a final night together before he leaves the country—a move made with the dual purpose of sparing him from further romantic torture and perhaps provoking her to action—but she keeps him waiting, and then arrives after he’s departed. Her ensuing tears fall harder than ever, yet also signal a profound pleasure in misery. She then becomes as a ghost, appearing at his Singapore apartment while he’s at work, leaving slippers under his bed one day and then taking them back another, phoning but never speaking into the receiver. These scenes are implausible but emotionally sound, love unrequited writ as a haunted pas de deux; An Affair to Remember or All That Heaven Allows without cathartic restoration. Ethical and emotional barriers advance to geographic ones, and then give way to passing months, years. Doomed love is both foremost and symbolic of things lost, misplaced, regretted.

Wong dispenses with slow motion, his ellipses cover bigger and bigger gaps, and then he leaps forward three years, veering off to Cambodia. History invades via newsreel, and tasseled lamplight toggles to afternoon sun. The future comes too quick. Recalling an earlier anecdote in which Mr. Chow talks of ancients carving holes in trees for the outpouring of whispered secrets (“What a pain, I’d just go get laid,” says his co-worker), Chow walks purposefully through desolate Cambodian ruins and locates a dark divot in a stone wall. He leans forward and cups his hands around the hole and his mouth. We’re not privy to the sound he makes. The string quartet on the soundtrack—which had previously played a seductive, violin-led waltz—now rumbles, tightly attending a mournful cello. As Wong hangs briefly on this shot of concealed confession, the only thing moving is Chow’s quivered Adam’s apple. After so many strangled emotions and denied catharses, that almost imperceptible movement functions as the film’s tearjerker. So delicate and lovely, yet so removed and pathetic, he speaks secrets into the void. It didn’t have to be thus, but time leaves unsatisfying options for the unresolved. Wong never insists on the dimensions of his film, deliberately hinting at other paths and interpretations. Among infinite possibilities (many of which Wong explored through years of shooting, rearranging, editing) he made a certain shape out of time, and fixed it there to represent a receded past. Memories are uncontainable, and therefore we must try to contain them. Before walking away, Mr. Chow plugs his secret with a fistful of earth, hardly enough to prevent it from escaping, but perhaps buying a little time.