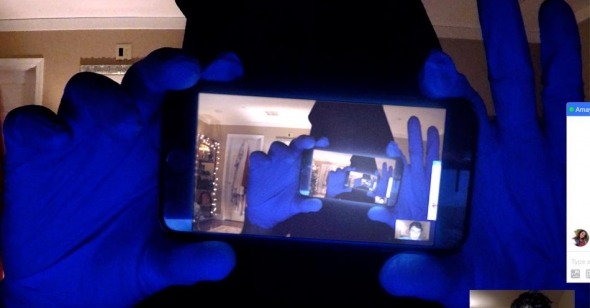 Cams Against Humanity
By Nick Pinkerton

Nearly twenty years after the masterfully orchestrated hype campaign accompanying its release, The Blair Witch Project can’t be seriously regarded as an American horror classic on par with, say, Rosemary’s Baby (1968) or The Texas Chain Saw Massacre (1974), but it does contain one scene that is properly iconic and more than a little clairvoyant of the aesthetic that would predominate in the fresh century to come. The scene in question is lone survivor Heather Donahue’s sniveling to-camera monologue, a self-shot vlog avant la lettre that anticipated the ubiquitous new mode of webcam direct-address, later to be echoed in everything from Chris Crocker’s tear-streaked early viral sensation “Leave Britney Alone” (2007) to Leo Gabriadze’s 2014 computer desktop POV horror film Unfriended.

Such shockers as semi-documentary The Town That Dreaded Sundown (1976), Ruggero Deodato’s Cannibal Holocaust (1980), and Rémy Belvaux, André Bonzel, and Benoît Poelvoorde’s Man Bites Dog (1992), not to mention snuff simulacra like the Japanese Guinea Pig video series (1985-88), had predated The Blair Witch Project, but it provided a watershed moment keyed to the digital crossover, also felt in surveillance-wary works like Michael Haneke’s Benny’s Video (1992) and David Lynch’s Lost Highway (1997). The coup of Blair Witch was regarded as unrepeatable—a 2000 sequel, Book of Shadows, was a traditional narrative horror film—but lo and behold a spate of found-footage films no longer assuming or relying on audience innocence and credulity began to appear, most prominent of these, in the realm of horror at least, being the Paranormal Activity franchise, whose low-overhead/high-yield formula helped to establish Jason Blum’s Blumhouse Productions as a force to be reckoned with in genre cinema.

Released through the auspices of Blumhouse, Gabriadze’s movie appeared at a moment when the found-footage horror film, by its very nature a form whose self-imposed limitations lend it a certain austerity, had grown fatally moribund. Moving beyond the usual gimmicks of faux-amateur handheld camerawork or fixed-camera surveillance views, Unfriended explored the possibilities of what we might call desktop mise-en-scène—the computer screen view that quite a few of us spend most of our waking lives staring at, consisting of a tabbed browser and a few dozen concurrently running apps. This was by no means an innovation: as early as 2000 Pierre-Paul Renders had attempted something of the sort in his near-future-set Thomas in Love, and since there’s been Lisa Kudrow’s iChat POV Web Therapy (2008-14) and a host of music videos by figures like Jerome LOL and Modeselektor and the guided Internet excavations of Cory Arcangel and Eugene Kotlyarenko’s miniseries SkyDiver (2010) and feature 0s & 1s (2011) and even an excursion into horror, “The Sick Thing That Happened to Emily When She Was Younger,” Joe Swanberg’s entry in the 2012 anthology film V/H/S. It was, however, a breakthrough in the multiplex, a confirmation that a paying audience would watch a narrative told entirely through Web 2.0 communication tools—and already it has spawned at least one imitator, the desktop-bound John Cho vehicle Searching, appearing in theaters only a couple of weeks after Dark Web, while word has just arrived of Blumhouse’s acquisition of Cam, per Variety “a technology-driven psychological thriller set in the world of webcam porn.”

Unfriended concerns a group of high school classmates haunted by way of a mysterious, uninvited Skype presence—a ghost in the machine, quite literally—motivated, we come gradually to understand, by a desire to exact vengeance on the kids for their role in shaming and bullying a peer into suicide. Knocking off the accused one by one, Gabriadze’s movie uses the classic “body count” thriller structure, as old as The Cat and the Canary (1927), and combines it with a morality play in which ancient superstition and contemporary tech exist side by side, concerned specifically with the widening disconnect between basic socially enforced decency and the total license that comes from operating behind the detachment and distance of a keyboard, observable in the boundless vileness of any online Comments section. Since the movie’s release, that bubbling bile has unmistakably flowed over and toxified the public sphere, as a comic Twitter personality has been elected to the American chief executive office, Cambridge Analytica and the colorful abbreviations and initialisms of the woman-hating manosphere have crept into mainstream discourse, and epidemic Internet dependency has made inroads into every aspect of IRL existence, rarely with salubrious results.

Unfriended: Dark Web, befitting this sea change, expands the scope of its Internet indictment from the problem of a single school to society-wide moral catastrophe, while the action here, once again, is limited to the laptop screen, appearing to unfold in real time. (Save for some incursions of ambient rumble on the soundtrack, the movie is also mostly limited to diegetic in-computer sound.) In this case it’s the screen of a MacBook cadged from a lost-and-found by broke twentysomething Matias (Colin Woodell), driven by desperate desire to find a computer capable of running the program he’s written that translates spoken word to self-shot sign language videos, allowing him to communicate online with his girlfriend, Amaya (Stephanie Nogueras), who is deaf. What’s intended as a generous gesture instead prompts a lover’s tiff, and while periodically attempting to patch things up, Matias retreats to a regular “game night” with college friends, meeting in a virtual space—though all but one of them live in the same unnamed city—to play Cards Against Humanity. The evening will shortly take a turn to the traumatic, but throughout Matias remains glued to his screen, trying to stop the chain of events that his minor trespass has set into motion while remaining in the default position of the online explorer—or filmgoer—that of the impotent observer.

The group is made up of loosely sketched-in Millennials: a DJ (Savira Windyani); a newly engaged lesbian couple, Nari and Serena (Betty Gabriel and Rebecca Rittenhouse); and a conspiracy-minded, off-the-grid video podcaster, AJ (Connor Del Rio), fulminating over Facebook, Google, and their use of user-generated content to harvest eyeballs, laughed down by his friends as he browbeats them from his parents’ basement with an apparently familiar rant ending “You’re the product!” The odd man out is Damon (Andrew Lees), a computer programmer based in London—a distance that gives him a sense of security even after the rest of the group find themselves threatened by their proximity to a very nefarious plot. Matias, intrigued by an influx of Facebook messages directed to the laptop’s former owner, a “Norah C. IV,” turns to Damon to assist him in conducting further research, in the process uncovering evidence that this Norah C. was involved in some very bad business—namely, the abduction of women and the production of custom torture porn, glimpsed in fragments terrible more for what they suggest than what they show, sold via a dark web marketplace called “The River,” entered via a portal that depicts a torch-lined subterranean waterway in 8-bit color graphics.

The reference is to Greek mythology’s River Styx, defining the border between the terrestrial, mortal earth and the realm of Hades, navigated by the boatman Charon—for those playing along at home, that’s “Norah C.” spelled backwards. Matias hastily Wikipedias this information, as he later, under queasier circumstances, will have to research “trepanation”—he’s not the sharpest crayon in the box, but a sweet kid and head-over-heels in love, given to memorializing his relationship with sappy Spotify playlists and soundtracked home video montages (“The Hike That Changed Everything”) of shared special moments. Filling the big screen canvas with the small-screen desktop space, Unfriended: Dark Web is cinema for the age of the post-cinematic affect, to borrow a phrase theorist Steven Shaviro coined in discussing the altered modes of producing and receiving moving images in a world where the film screen has become just one in a crowd of the ubiquitous glowing rectangles used to negotiate modern life, where cinema has been both marginalized and made omnipresent, with every Matias an auteur of their own experience.

Matias will discover soon enough though that he’s not actually in control of his narrative, and that what was curated with an eye to making a gentle romance is in fact a horror story. By crossing over into “The River,” he puts himself and his friends on the radar of a shadowy cabal of boarders, barterers, and butchers who gather at The River and who call themselves The Circle. One representative appears lurking unbidden in Amaya’s home, unbeknownst to her, a menacing, blurry figure taunting a watching Matias with threats to her safety—members of The Circle are possessed of state-of-the-art tech that enables them to conceal their identities beyond the cover that their hoodie uniforms provide, hiding them behind a cowl of artifacting and redacting their custom scary-font Facebook messages the moment they’ve sent them. Legion in number and fast working deep-dive researchers, The Circle have full access to everything that their targets (or their loved ones) have ever said or done in front of a digital camera aperture, whether they thought that it was recording or not. So Matias’s sign language app is highjacked, Nari and Serena’s private conversations are mined for material to set up a sadistic conundrum, and AJ’s antiauthoritarian screeds are cut up into an implicating sound collage that brings trigger-happy cops to his doorstep. (The choppy, awkward results recall, presumably inadvertently, the answering machine message cut-up bomb threat in 1994’s Clifford.)

AJ will shortly be perforated by a hail of police bullets—like Gerard McMurray’s The First Purge, with its tossed-off references to presidential pussy grabbing and its evocation of the Charleston church massacre, Dark Web is loaded with scenarios and vocabulary that plug into collective memory of the recent news cycle, including a “covfefe” joke and plot points revolving around Blockchain and crypto-currencies. But where McMurray’s movie has neither the dangerous, unpredictable energy of authentic exploitation nor the basic chops of an effective mid-level actioner, Dark Web, not overly compromised by success, retains its predecessor’s sense of lo-fi menace, marrying the now-established “rules” of the budding franchise to a fresh storyline.

No back-from-the-grave teenagers here—The Circle are flesh-and-blood fiends with a catalog of methods for twisting the knife in their victims, who once done with Matias’s friends conduct an online poll to decide his fate. The idea seems to take inspiration from William Castle, whose 1961 Mr. Sardonicus climaxed with an audience-participation “Punishment Poll,” purportedly allowing the crowd to decide the fate of the eponymous villain, Roman arena-style. In fact Castle only filmed one ending, whereas Dark Web apparently really does have a couple—I’ve only seen one of them, and therefore can only speak to its considerable merits. The kicker image is a pull-back reveal that locates the screen that we’ve been watching in a larger, crowded field of chat boxes and tickers giving up-to-date odds on the outcome of the unfolding decimation of Matias and his friends, a spectator sport set-up whose ultimate result was never really in doubt. Like the conclusion of Oliver Assayas’s 2002 demonlover, it shifts our perspective from the production to the consumption of forbidden images, in the process pulling off a combination of technophobic warning and nasty implication of the audience and Internet culture as a whole. Earlier the film had established its key image, that of a fathomless mise-en-abyme, when a Circle member turns the screen of his phone so that Matias can see it, revealing that they are looking at the same screen, this creating an image of screens within screens in perpetuity. By this point we’ve completed the transition from the middlebrow nihilism of Cards Against Humanity (“a party game for horrible people”) to the real thing, a game night conducted by horrible people amusing themselves by monetizing human suffering. Crackpot AJ, as it happens, was right all along. You’re the product! Wake up SHEEPLE!