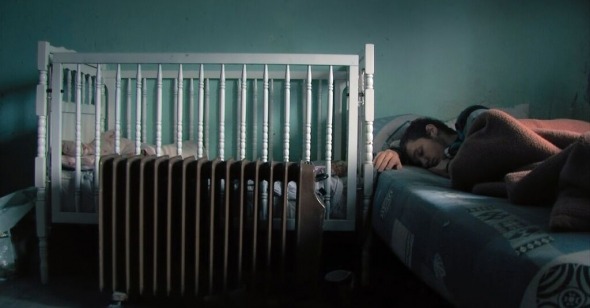 The Family with Druzina: Spotlight on Rok Biček’s Progressive Portraiture plays Sunday, January 13 as part of Museum of the Moving Image’s First Look 2019.

Rok Biček’s years-spanning document of the Rajik family is like a postmodern variation on a Thomas Hardy novel. In the past, it would have been fairly easy to look at young Matej Rejik’s circumstances and identify him as someone who’d been benighted by cruel fate. His situation is unenviable, and as The Family (Družina) makes evident, he does the best with the hand he’s been dealt. However, after decades of relativism in the social sciences, anti-interventionist documentary, and well-meaning academic liberalism, we come to The Family with a different, somewhat more complicated lens. That’s to say, we come to nonfiction films with certain assumptions about the people in them (no one is without bias), while simultaneously recognizing those assumptions as biased, and possibly unfounded. We no longer know the proper way to look at a situation like Matej’s, and so Biček’s film cows us into stony silence.

The Rajiks appear to be a relatively poor family scratching out a living in post-Communist Slovenia. We never get any concrete information about their economic status—The Family is short on facts—but their home is old and dirty, they do not seem to eat particularly well, and when particular items are seen that indicate expenditure, they are bottom-of-the-line. Matej, who is studying to be a computer programmer, has cobbled together a PC out of low-grade junk, with a hard modem line strung around his room and out the window. More damningly, when father Boris dies, we see brother Mitja visiting his grave, which is marked by a plywood headstone with press-on letters.

On the other hand, Matej does have a fairly decent car, and is able to provide his baby daughter Nia with a nice brand-name stroller. Later in the film, Matej and his girlfriend Eli quite unexpectedly take a trip to Paris. So one begins to wonder: is Biček is contributing to Matej’s welfare? Does Slovenian life simply look “poor” to the uninformed Westerner? Is the family choosing to spend its money on some things and not others? Whatever the case, The Family continually challenges our immediate narrative of impoverishment, without ever actually dispelling it.

We are also told, from the press notes, that Matej is the only member of his family without special needs. As Biček puts it, Matej “is completely different—both from the different and from the normal.” The degree to which this is the case, however, is not entirely clear. We can see that Matej’s mother Alenka walks with two crutches, and his older brother Mitja exhibits the physical and behavioral markers of Down syndrome. But in his review for Variety, Jay Weissberg claims that all three members of Matej’s family experience mental disabilities. How can we be sure of this?

If Weissberg is correct, then this in itself poses certain problems for the liberal viewer, since on the one hand we can understand that this would be a very difficult, arguably limiting environment for someone of standard cognitive abilities to grow up in. At the same time, we do not want to simply assume that such a family situation would be untenable. This would be inexcusably ableist, since people with all manner of intellectual capacities can be and are fully integrated into mainstream life. We want to sympathize with Matej when, for example, hs fatherBoris tells a school counselor that there is no way Matej could ever go to college, and she has to patiently explain to him that, aside from some possible learning difficulties, Matej is perfectly capable of pursuing higher education.

But we don’t really know for certain whether Boris’s objection stems from misjudging Matej’s intellect or from a class-based presumption of his son’s horizons. And although Boris is grumpy and short-tempered, and Matej’s mother Alenka seems a bit scattered, we would have no idea simply from what Biček shows us that either of them have any mental disabilities. They seem like older parents who are simply distracted and not fully comprehending the ins and outs of Matej’s life. But if we are told that they have disabilities, then of course we begin questioning certain aspects of their responses and lifestyle. The Family confronts us with situations that are perfectly ordinary, without directing our interpretation. It’s only outside knowledge that complicates matters.

Matej’s older brother, Mitja, is another matter. But as we see, particularly in Biček’s early, 2007 short version of The Family, also showing in First Look, Mitja is happy, aware, and engaged, somewhat at a distance from Matej and his friends but still fully capable of social interaction. If anything, he tends to lean into his role as the clown of the group, playing up his disability for self-mocking humor. We don’t see a great deal of intimate interaction between Matej and Mitja, but we do see standard brotherly behavior—affection laced with exasperation.

Biček’s steely, nonjudgmental gaze, combined with his occasional breakthrough into the action—almost all the family members address him at some point, treating his presence as an unobtrusive fact—throws the viewer into a position of crisis. We don’t know if we should feel pity for Matej, or respect, or conclude that “everyone has a family” and his is no different in its foibles than any other. The Family (note the generic, almost Wisemanian title) doesn’t tell you how to feel, and so it can become a mirror for our most deeply rooted prejudices. Matej is neither a victim nor a hero, and whether we recoil at his situation, or defensively validate its normalcy, we are playing into Biček’s hands. Paternalistic liberalism sees the Rajiks, and Matej in particular, as examples of social collapse, or bad luck, or the underdevelopment of Slovenia. There is inadequate evidence to support any of these presumptions, and ample evidence to complicate them.

Probably nothing indicates this quite as dramatically as Matej’s decision, near the conclusion of the film, to relinquish his paternity rights to his daughter Nia. He and his daughter’s mother Barbara are shown to be in a custody battle that grows increasingly hostile as the documentary continues, to the point that Barbara stops allowing Matej to see Nia at all. When he finally uses a family services lawyer to enforce a parental visit, Nia is confused and traumatized, and although it is clear that Matej dearly loves his daughter, he can also see that the rancor between him and Barbara is negatively affecting her.

So he does the unthinkable. He walks away. Even though Matej clearly became a father far earlier than he intended to—and wants to get a vasectomy so as to not repeat his prior mistakes—his relationship with Nia marks the start of a new family, one over which he has a modicum of control. Regardless of how we evaluate, or refrain from evaluating, the conditions of Matej’s youth, we can concede that his own family life, like that of anyone, is a condition of chance, of “thrownness,” in Heidegger’s terminology. When it becomes clear that his conflict with Barbara is insoluble, he makes the one decision for Nia that he can make unilaterally. He lets her go.

Will this be the right decision? Will it create heartache for Nia later in life? There is no way of knowing. But what Biček shows us very clearly is that it is a logical decision, made by a young man situated within a particular set of circumstances. His decision is neither selfless nor expedient. And it is his, not ours.