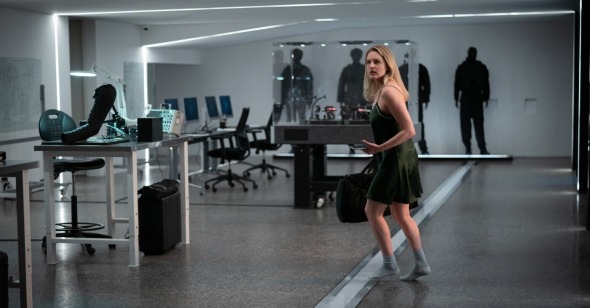 The intersections between gender and technology have provided rich subject matter for recent films ranging from documentaries to dystopias, as well as fecund ground for contemporary cultural criticism. The number of books and essays analyzing seemingly innocuous aspects of social media performativity are matched by inquiries into our alarming helplessness under large-scale surveillance. Anna Wiener’s memoir Uncanny Valley, explores the banal yet toxic modes of gendered behavior modeled by Silicon Valley’s mythologized “great men,” which in this industry reifies a specific form of cutthroat utilitarianism, the infectious pull of big money, and a sinister male asceticism. Writer-director Leigh Whannell’s reboot of The Invisible Man visits these themes by way of the horror-thriller, crafting an affective and relevant parable about imperceptible flows of power that are made visible through women’s bodies.

The earliest cinematic adaptations of H.G. Wells’s The Invisible Man, in 1933 and 1940, were channeled through queer horror icons James Whale and Vincent Price, respectively, long encouraging related readings. In 2000, Paul Verhoeven’s Hollow Man more vividly projected the sexually violent possibilities of a heterosexual man suddenly unaccountable to anyone, even his own reflection. Now, twenty years later, Whannell’s adaptation locates new applicability for this story in the notion of “believability,” a concept that frequently tests and re-traumatizes women who have voiced their experiences of abuse, a longstanding area of feminist discourse and a keystone issue for the recent #MeToo movement. In the middle of the night, Cecilia Kass (Elisabeth Moss) leaves her abusive partner, the billionaire optics scientist Adrian (Oliver Jackson-Cohen). Days later, news breaks that Adrian has killed himself and Cecilia—in sheer disbelief of this well-timed finality—is offered a five-million-dollar inheritance. Any relief that accompanies Adrian’s death vanishes when Cecilia realizes that the suicide is a ruse: Adrian has developed the technology to become invisible, crowning himself with the power to further Cecilia’s social isolation and plague her forever. While invisible, Adrian watches Cecilia in the shower and photographs her sleeping, a voyeurism that escalates to more elaborate unseen maneuvers, like throwing Cecilia around an empty house and framing her for murder.

At a moment where ludicrously advanced facial recognition software exists, its opposite, engineered invisibility, hardly feels unimaginable. Yet, predictably, nobody believes Cecilia. To make matters worse, the men around her—including James (Aldis Hodge) a police officer and family friend housing her—encourage Cecilia not to let the past “get to her,” as if such a straightforward choice exists. While The Invisible Man’s horror lies in its frank, violent metaphor for all kinds of abuse, the film’s scenes that present the unrelenting, compulsive ways that men, even “nice guys,” protect other men are more subtly chilling.

Cecilia is told that receipt of her inheritance—paid out in a series of installments—will be cut off if she messes up any fine print clauses, one of which is being convicted of criminal behavior. Of course, because Adrian isn’t actually dead and is obsessed with blocking Cecilia’s chance at a new life, her receipt of this money is something of an unbeatable trap, a concept that Whannell—having penned Saw (which gets briefly cited in The Invisible Man)—launched his career with and has repeatedly returned to. A line can be drawn between Adrian, whom we see very little of, and the transient, frequently disembodied voice of Saw’s patriarchal villain Jigsaw. While the torture devices Jigsaw and Adrian design are gymnastic feats of engineering, the technological brilliance of both men is obviously eclipsed by a one-dimensional, daddy-knows-best worldview and a menacing power complex. Jigsaw—a man who thinks drug addicts, adulterers, and poor people who take on ethically compromised work are ungrateful for their lives—is hardly a nuanced thinker; in fact, his vengeful zeal for righting injustices mostly ignores the structural inequalities that have created them. Yet while the Saw franchise can dangerously slip into a kind of admiration for the perverse spectacle of Jigsaw’s “genius,” The Invisible Man demonstrates a maturation in Whannell’s thinking about masculinity and power, ideas present in his previous films (Insidious, Upgrade) that now appear to have undergone more rigorous treatment.

This maturation is also evident in The Invisible Man’s attention to a diegetic world outside of its immediate action, especially the gentrified San Francisco setting in all its post-tech takeover blandness: Lyft is summoned as a getaway car; Cecilia goes to meet her sister in a restaurant with neon Chinese characters on the sign outside that reveals generic hipster fine dining inside; the stereotypical Victorian row houses that usually pepper films set in this city are nowhere to be seen because James and his daughter live in the suburbs. Here, the domestic is a site of social invisibility, a concept most creepily actualized by Adrian’s modernist mansion (obviously featuring a top secret home lab) located outside the city proper, its grounds surrounded by concrete walls, steep cliffs, and acres of forest. It’s a striking house dominated by glass, nodding to the architecture in Alex Garland’s Ex Machina, another film about the possibilities of technology to survey and dehumanize women. The Invisible Man’s opening sequence, an extended shot of jagged waves crashing against these sharp cliffs—a naturally dramatic landform made supernaturally scary in films from The Ring to Harry Potter—works here as a less overt reference to the high elevation of Dracula’s castle, insofar as Adrian is a kind of late capitalist vampire: reflectionless; stalking and toying with his prey; draining her life force for power and pleasure.

The release of The Invisible Man just several days after Harvey Weinstein’s first round of criminal convictions makes for nearly uncanny cultural framing. In this momentous wake, it joins a growing number of films responding to forms of discourse that have emerged from a post-Weinstein media landscape. Due to the shared timeliness of their subject matter and similarly anxious viewing experiences, the film may also gain comparisons to Kitty Green’s concurrently released The Assistant. The Invisible Man, however, is actually more like the underappreciated Unfriended: Dark Web (2018). Both films are interested in the quotidian and terrifying real-world extension of invisibility: online anonymity—even if neither quite plumbs the depths of this analogy. While Dark Web, with its faceless circle of hackers, is quite literally about this dynamic, The Invisible Man makes this connection in moments where Cecilia futilely paints nail polish over her webcam, or when the invisible Adrian uses her e-mail to send an accusatory message to her sister.

To Whannell’s credit, a lesser film would have made Cecilia seem unreliable in order to stoke our uncertainty. Thankfully, The Invisible Man doesn’t fall into this trope. Instead, the film employs dramatic irony to communicate ideas about gendered experiences: the audience never loses trust in Cecilia, which makes it all the more infuriating that, even after the film has turned all its unsettling corners, James makes the startlingly naïve claim that there is more than one victim here. There’s a moment in which we watch Cecilia internalize this thought before the film’s finale, a refreshing moment of feminist vigilantism that ties everything together; rape-revenge by way of a futuristic, Black Mirror-esque twist. However, also like Black Mirror’s more didactic episodes, its ending feels slightly too calculated. More concerning: The Invisible Man’s dénouement sets up a compact and effective story about trauma for a possible franchise treatment. Let’s hope not.