Old Joy / My Dinner with André In one of his Great Movies essays, Roger Ebert says that My Dinner with André was the first title that came to mind when a friend asked him if he could name a film that was entirely devoid of clichés. It’s an apt enough observation, except for the fact that at this point, thirty years after helping to usher in the American indie boom by proving that two characters trading dialogue in close-up could be the stuff of both compelling drama and robust per-screen grosses, Louis Malle’s film has, by no fault of its own, become a cliché: the celluloid gabfests against which all others are measured. Not to mention the subject of thirty years’ worth of variably executed parodies, from Andy Kaufman’s sweet short feature My Breakfast with Blassie, in which the late comedian took the Wallace Shawn role opposite pro wrestling legend “Classy” Fred Blassie as a roughneck version of André Gregory) to the recent Community episode “Critical Film Studies,” a well-played piece of pop culture riffage that has itself become a sort of conversation piece (Matt Zoller Seitz’s excellent appraisal in Salon can be found here).

My Dinner with André is famous enough, in fact, that even those who haven’t seen it have some idea of its contents: a pair of old friends (Shawn and Gregory, who wrote the script and named the characters after themselves) who haven’t spoken in a long time play catch up over the course of a single evening in a New York City restaurant. This simple description of course belies the complexity of their exchange, which takes up ninety percent of the film’s running time.

Sitting down to watch the film again, I remembered the basic rhythm, with André dominating the first two-thirds of the movie with stories of globe-hopping, mind-expanding adventures, leading to Wally’s rebuttals in the name of less esoteric pursuits. The metaphysical schism is obvious, with André’s aggressive search for meaning balanced against Wally’s shrugging acceptance of a larger cosmic mystery. What I’d forgotten—and what seems to me to be considerably more interesting—is the way that André’s gregariousness, which drives the conversation and by extension, the film, is consistently offset by a sense of melancholy. In between tales of communing with trees and being buried alive, he makes frequent mention of his sadness following the death of his mother, adding that his friends have thus far proved incapable of broaching the subject in any sort of honest way. “We can’t be direct,” sighs Andre, “and so we end up saying the weirdest things.”

My Dinner with André is not a film that lacks for potential thesis statements, but for me, that’s the key line of the script, a precise bit of self-diagnosis that accounts both for André’s relentless unburdening of his experiences and also why Wally, for all his seeming eagerness to serve as a human sounding board (“tell me more”) doesn’t say anything about having missed his friend in the time since their last meeting. We know from the start that he’s been dreading seeing André, a man he’d “been avoiding literally for years” as he explains via voice-over. But even as the erosion of Wally’s doubts is suggested via a series of rapt reaction shots, he never comes clean about his avoidance. When André mentions that he’d tried calling him up upon his return from teaching an experimental theater workshop in Poland, Wally stammers, “I think I was out of town.” Malle’s camera, always intimate but never obtrusive, catches both men’s eyes registering the lie in the space of a single cut back to André, who pauses only ever so slightly before continuing his story.

By contrast, Kelly Reichardt’s 2006 drama Old Joy hinges on scene in which a character attempts to be direct: the moment when aging stoner Kurt (Will Oldham) looks into the campfire he’s sharing with Mark (Daniel London) during the overnight portion of a hiking trip through Oregon’s Cascadia and says, plainly and painfully, “I miss you.” Reichardt keeps her camera trained on Mark’s face for nearly thirty seconds as Kurt continues, the halting tenor of his voice doing little to disguise the sense that this is something he’s rehearsed, at least in part. “I miss you really, really bad,” he continues. “I want us to be real friends again. There’s something between us and I don’t like it. I want it to go away.” Mark’s response is to grab his friend’s shoulder and murmur denials (“What are you talking about? We’re fine”), but as in Malle’s film, what’s caught in this reaction shot communicates a truth that underwrites—and undermines—what’s being said out loud.

If My Dinner with André offers a torrential downpour of dialogue, Old Joy is like a weekend of scattered showers: its 73-minute running time is marked by extended passages of quiet (though never silence, as Reichardt’s soundscapes are as sophisticated as those of any filmmaker currently working). This reticence isn’t just a matter of Reichardt’s congenitally understated aesthetic sensibility, any more than My Dinner with André’s indefatigable chatter could be used to pigeonhole its director as a “script-based” filmmaker (anyone who has seen the India documentaries knows Malle has a supreme visual facility). The fact is that Mark and Kurt just don’t have that much to talk about, their life paths having diverged to the point where mutual curiosity is, if not feigned, at least forced. My Dinner with André takes the shape of a passionately engaged argument, but in Old Joy, neither man seems to want or need convincing of anything. Kurt’s accounts of “transformative” experiences partying with other countercultural refugees (shades of André, albeit far less articulate) don’t resonate with Mark, whose thoughts about his own, more grounded existence—he has a job, a wife, and a baby on the way—prove similarly unpersuasive. Tellingly, the most forward bit of rhetoric in Old Joy is not verbal, but physical: a laying on of hands that reiterates Kurt’s need for connection and is summarily rejected, albeit after a brief moment of surrender (the close-up of Mark’s hand, wedding band prominently displayed, slipping below the surface of a bubbling outdoor bathtub, is indelible).

It makes perfect sense that Malle’s film about two professional playwrights does more with language than Reichardt’s portrait of Pacific coast burnouts, and while it’s possible to place the films on some sort of continuum, the circumstances of their production, release, and reception are almost prohibitively disparate: one was readily embraced as the work of an industrious French auteur suddenly turning his attention to the sort of Americans who enjoy Louis Malle movies, while the other slowly gained momentum on the international film-festival circuit and has mainly been screened in limited-run engagements at cinematheques. It is interesting, though, to examine their respective endings, which strike me as inverted mirror images. My Dinner with André concludes with another voiceover, scored to Erik Satie’s fragile, unsolved “Gymnopedie 1,” in which Wally describes leaving the restaurant and taking a taxicab home, the cityscape suddenly rendered pregnant with memories and associations. This reinforces the idea that the film has been told from Wally’s point of view, and that he’s emerged affected and maybe even enlightened, eager to reflect on the evening and share his version of events with his girlfriend. It’s such a beautifully written and realized passage that it almost makes us forget the fact that it removes André from the equation, rendering him, for all his stated vulnerability, nothing more than a catalyst to another man’s epiphanies. What André thought of his dinner with Wally is, if not immaterial, beyond the frame.

The ending of Old Joy is more destabilizing in terms of what it does to our identification. Reichardt’s film does not feature a voiceover, but the opening scenes suggest that we are “with” Mark: Kurt is introduced as a voice on the telephone inviting him away on a weekend retreat, and we’re with Mark in the car when he goes to pick him up. As the film progresses, however, Reichardt starts to gradually privilege Kurt’s vantage point, most clearly in the scenes where Mark receives cell phone calls from his girlfriend and is seen answering them either in long shot or through the car windshield—putting himself at a distance from what is supposed to be an intimate reunion. (Reichardt achieves something similar in her later feature Meek’s Cutoff, which slowly asserts the perspective of the female characters over the male ones until it feels turned inside out.)

After the trip back from the abortive embrace at the hot springs (which is notably wordless), Mark leaves Kurt in front of the house where he’s staying in town and then drives off into the night, his car stereo blaring political talk radio. His expression as he sits in the driver’s seat is unreadable, but a small gesture (the only kind in this movie) speaks volumes: he rolls the window up. Where Wally’s glimpses through glass at neon-lighted storefronts indicated an opening-up, Mark seems to be closing himself off. That’d probably do for an ending, but Reichardt then cuts to Kurt, who doesn’t seem to have ever gone inside after being dropped off. Instead, he wanders the streets aimlessly, looking into store windows and then just past the camera before disappearing from view, the film’s title superimposed over the image. Whether one thinks that this coda is an objective presentation of Kurt’s wayward fate or Mark’s mournful fantasy of a friend he knows he will not see again, it serves to transform the film from “My Road Trip with Kurt” into something far more slippery, and affecting beyond words. 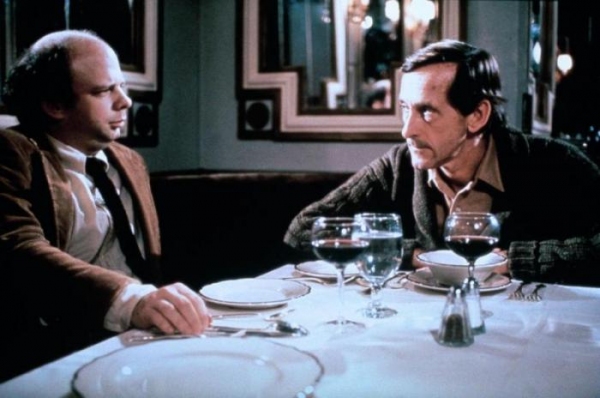