“Sound is a double-edged invention and its most probable application will be along the line of least resistance, i.e. in the field of the satisfaction of simple curiosity. . . .

Sound used in this way will destroy the culture of montage, because every mere addition of sound to montage fragments increases their inertia as such and their independent significance; this is undoubtedly detrimental to montage which operates above all not with fragments but through the juxtaposition of fragments.

Only the contrapuntal use of sound vis-à-vis the visual fragment of montage will open up new possibilities for the development and perfection of montage.” —Sergei Eisenstein, Vsevolod Pudovkin, and Grigori Alexandrov, “Statement on Sound”

The cut is the cinema’s most potent means of alchemy. Bringing images into collision, the cut looses hidden meanings from ordinarily stable elements. It thus constitutes a purely modern phenomenon: montage, a magic property only possible in the cinema, a rapid succession of changing images occasioned by the Industrial Revolution’s technologically guided pace toward chaotic consciousness. The more the cut brings the individual shot into a combustive relationship with its brethren, the more the power of this cinematic property is fully realized. It can then enact the overriding principle of cinema, by which any sure universe so recorded or constructed is shaken apart and creatively reinstated according to indefinable equations, codes of simultaneous, multiplying meanings hitherto unknown. The filmmaker, in awareness of the cut’s potential, discovers malleable functions of time and space and makes a mockery of civilized man’s pompous attempts to control in celluloid an unpredictable, indomitable world where existence is truly artifice, a rickety structure of proprietary delusions.

More often, however, the force of the cut is ignored or contained. As if domesticating a feral beast, a majority of filmmakers make the decision, intentional or no, to employ the cut solely for purposes of narrative progression and spatial orientation, thus neutralizing its transcendental life in poetic montage. Their secret weapon in this respect is synchronized sound. With the advanced technique of enveloping sound to smooth over what remains of editing’s jarring sensations comes a steady reliance on music to seal cracks between shots. The Soviets warned of the dulling effect of this practice: energy is unleashed from something ripped asunder; when falsely presented as whole and unharmed, that something’s energy is nullified.

Pop music is doubly insidious when misused as sonic wallpaper. A well-crafted two- to three-minute song is a rare gem, the perfect embodiment of an emotion or mood as expressed in sound and rhythm. It is also, usually, a commercial product separate in production and context from the film in which it becomes reappropriated. To merely reinforce a song with like images, or to compensate for weak images with a lazily applied song, is a waste. With nothing to offer but an obvious connotation, a recognizable song carelessly slapped onto a collection of images becomes a creative dead end. To bring an image, another image, and sound into violent correspondence, to add a third (or even fourth) dimension to the dialectical alchemy of montage suggests far more adventurous possibilities.

Kenneth Anger was the first American filmmaker to understand the pop song’s dark potential for the realm of moving images. And Scorpio Rising, the 1964 avant-garde short that marks the summit of Anger’s vision, was the first American film to not just acknowledge in sound and image a youth culture whose hold on the American imagination had achieved a theretofore unprecedented power and influence, it was the first to seriously study the consequences of such a break. Rock ‘n’ roll was, of course, the single most important product to emerge out of postwar American popular culture; rock ‘n’ roll as juxtaposition to (as opposed to facilitation of) the images of that culture is integral to Anger’s legacy of magical yet critical montage. To understand a film by Anger is to understand the use of sound in accordance to the cut. It is to learn from a master.

Scorpio Rising is structured according to the tone and lyrical content of thirteen rock ‘n’ roll songs from the Fifties and Sixties, the dawn of the new era in question. Each song inaugurates a new sequence in the film’s portraiture of a violent, homoerotic motorcycle subculture, and each along with its corresponding images, in what Eisenstein deemed vertical montage, discovers the mythical stakes of massive cultural schizophrenia. As an Aleister Crowley protégé and an adherent of a sort of Satanic paganism, Anger’s occultism has made certain that his take on American pop culture, from his penned exposé Hollywood Babylon to his association with Manson family members, has been and will always be labeled lurid or mystical. And yet his revolutionary use of pop iconography betrays an underappreciated sociological eye, one attuned to the morbid dream life America has constructed for itself in order to exorcise the fantasies it cannot play out in reality. Scorpio Rising is a “conjuration,” to use Anger’s own description, but also an investigation. The arrival of “(You’re the) Devil in Disguise” in the fifth section of Scorpio Rising along with the section’s first two cut together shots—a pan over a comic strip of motorcycle maintenance and a shot of Scorpio lying in bed surrounded by a pop culture shrine—is crucial to this investigation for several reasons. The 1963 Elvis Presley number first off evokes the epoch-defining legend of the King himself. Elvis is the most potent cultural icon of the post-World War II era, and to this day remains the U.S.’s most influential popular performer. He was the male counterpart to Marilyn Monroe, and his arrival in the Fifties, redefining music, fashion, and attitude, both harkened and symbolized a generation’s uninhibited sexuality.

The ramifications of the King’s reign over popular culture in reality and in myth are ironically suggested in the lyrics of “Devil in Disguise.” One of Elvis’s hottest rockabilly rave-ups, the song, like so many of its time, plays with religious imagery in both music and lyrics. In the slow part of the chorus Elvis pronounces his love interest a heavenly vision (“You look like an angel . . .”), only to deride her in the rocking second chorus and the verses into which they transition as a devil that had tricked him in love and broken his heart. The way Anger uses the song in Scorpio Rising refashions it in the same light as Norman Mailer’s question concerning the Beatles: “Demons or saints?” That is, does Elvis’s virile charisma liberate danger and sexuality from forces of repression, or does he commercialize it into one more salable cultural commodity? Is Elvis an angelic-voiced saint leading the way toward rock ‘n’ roll freedom or really a wolf in sheep’s clothing, lending his sex appeal to rancid temptation of mindless materialism? This line of inquiry coming from Anger the occultist, the traditional terms are reversed: the devil symbolizes pagan emancipation from the strictures of Judeo-Christian thought, with Elvis as Lucifer initiating through thundering beats and sizzling guitar riffs a bacchanal tide of self-empowering reverie; the angel symbolizes domestication and soft-hearted slavery, the Elvis of lunchbox covers and mediocre movies who keeps the culture industry humming along to the tune of “Teddy Bear.”

“Devil in Disguise” therefore links Elvis to Dean and Brando, the two postwar actors who did for the silver screen what Elvis did for the concert hall, forming a holy triumvirate of pop idols promoting and enforcing images of macho cool. The “purity” of that cool is never taken for granted by Anger. The sequence featuring the song introduces these male rebels as images and only images; thrown into an intricately structured montage, they are proven to constitute the film’s antihero’s identity and his youth- and death-obsessed cosmos. Opening with a camera pan over a comic strip showing a scene of motorcycle maintenance, the sequence immediately echoes the previous “Wind-Up Doll” section’s insistence on motorcycle culture’s roots in juvenilia. The antihero Scorpio then makes his first appearance—in bed, reading comics and backed by a wall dedicated mostly to photographs and posters of Dean, though a skull flag displayed above his head ties the disparate elements back to a single overriding principle. The cut between the two initiates the section’s major opposing forces—imagery and its consumers, the richness of one-dimensionality and the paucity of three-dimensionality, innocence and corruption—as the song provides its own duality.

Further cuts link Scorpio to the comic strip panels he reads, rife with violence and homoeroticism (even the Peanuts are implicated) and recalling the previous “My Boyfriend’s Back” (Death as cloaked skeleton boyfriend to danger-courting greasers) and “Blue Velvet” (half-naked, leather-drenched riders as prowling hip cats) sequences. “Devil in Disguise” isn’t simply a recap, however—like each additional segment, it adds a brick to the building that is the film. Here the brick is the cumulative effect of the comic strips, the Dean paraphernalia (including a James Dean Memorial Foundation badge—that legend’s consecration in a good-looking corpse death is dully noted), and scenes of Brando from The Wild One captured from a TV screen. Scorpio is literally surrounded by media images of noncomformity. What, then, is the nature of his nonconformism? When Scorpio lights a match using his teeth Anger cuts to a shot of Brando with cigarette dangling from his lips, just as the first cut of the sequence connects the desirability of motorcycle culture to the recipient of its message; later his imitative qualities get put to use when he becomes a church-desecrating “leader” in the “I Will Follow Him” sequence, in which images from the “Devil in Disguise” sequence are compared to images of Christ and Hitler. The question then becomes: if Scorpio is the leader as follower-fascist, who follows him?

In other words, Scorpio—demon or saint? Or both? Surely, Scorpio is a devil in disguise. A Frankenstein of images absorbed but never evaluated, he is revealed over the course of the film to be, behind the “cool,” a whirlwind of liberated but thanatotic instincts bred in a media landscape neither frivolous nor brainwashing but somewhere in between. That “in between” is what Anger attempts to convey through vertical montage. Scorpio’s identity isn’t psychological, but elemental, which is why to our eyes he seems a confusion of iconoclast and tool, angel and devil. Terms, symbols, icons, and levels of reality (Anger’s original footage saturated to the level of lo-fi Hollywood gloss; appropriated movie and TV images dragged down to the level of unconvincing artifice) battle it out in and through Scorpio, their meanings set off against one another. And along with all this—the song. “Devil in Disguise” doesn't arrive on top of the images—to use the language used to describe the uncritical sound-image relationship—because Anger’s soundtracks don’t “cover” the image-track with a comfy blanket of reinforcement. “Devil in Disguise” drives the images, plows through them, and brings its uncontainable, primitive force to bear on a filmic world already bursting with sexual frustration and rage. That force explodes any rudimentary interpretation of Scorpio’s significance. He is Christ, Hitler, Dean, Brando, and miscellaneous pop debris, a Harley-hopping mixed message of revolt and thoughtlessness, the latest in dogmatic reverence and an arrival of fearless manhood on the scene of complacent mediocrity, contradictions and conflicts exploding like an instinctual urge out of vertical montage. This isn’t merely “camp”—it is irony, metaphor, visceral charge, and irreconcilable strands of madness conveyed through the cut and the fissure-inducing jukebox selection that serves as both expression and commentary, its role in montage cloaked in layers of angelic-demonic disguise. 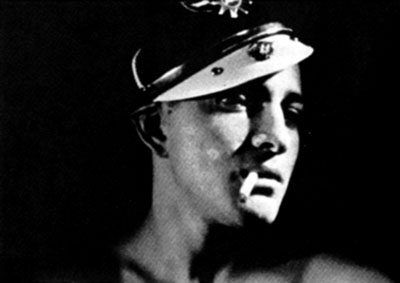