The Abyss Stares Back
Andrew Tracy on Going Hollywood

The paradox of mass entertainment is that pleasure is always personal. Enforced homogenization of audience taste has done wonders to iron out the kinks of viewer personality, but it operates from a core of uncertainty and nervous doubt—in matters of audience wish fulfillment, it’s a command economy more than a response to consumer demand. For all the usual cant about the ideological construction of Hollywood product, that ideology is as permeable and consistently unstable as any other system of social control. The unique skill of the Hollywood dream managers, at least back in the more hands-on days, was to utilize those spaces between to both subvert and shore up the monolithic structure of the whole, to have the film essentially read against its own grain without infringing on the bounded safety of its outer contours.

To a certain extent, the disruptive Surrealist practice of the 1920s where one would walk in and out of films randomly in order to craft one’s own dream narratives—the first of many “appropriative” challenges to the supposedly ironclad discourses of Hollywood cinema—was already inherent within any given film. While the Surrealists sought to void the various texts of meaning in order to build a new text made up of evocative fragments, the assembly line fantasies of Hollywood often had only the most tentative of holds on meaning in the first place. The intricacy, franticness or bewilderment of their visual arabesques often took place over the thinnest narrative ice, a quality that was only accentuated as Hollywood cinema moved out of the otherworldliness of the silent era and into the supposedly more concrete world of sound.

The Hollywood of the first few years of the sound era—roughly 1927 to 1933—is a uniquely rich field for the searcher after the expressively esoteric, a medium still getting a handle on its new dominant technology while trying to find a visual language to match it, expressing its growing confidence in the most boastfully ostentatious of ways. The unique disjuncture between the narrative and thematic poverty of the rote genre piece and the often bizarre flamboyance of technique—frequently taking the form of long and intricate tracking shots for no good reason other than to demonstrate the filmmakers’ ability to move the camera freely without impinging upon the heretofore limited range of the microphone—makes for a cinema terminally at odds with itself: aiming to seduce the viewer into a seamless, all-enveloping story world while continually shocking him out of it with garish displays of technique.

It would not do well to generalize all (or even most) films of this period as following this self-rupturing model. What’s fascinating, however, is that these tendencies occur most frequently in the most uninspired product, where the need for stylistic cohesion is less pressing. Such seemingly undistinguished stabs at cheap, digestible wish fulfillment contain a casual (small-s) surrealism that shocks not because it subverts the canned seductions of mass entertainment but precisely because it enforces them, even as their own utter strangeness cuts the viewer off from submersion in its impoverished narrative world.

The particular case in point: Going Hollywood (1933), a uniquely soporific, witless, and charmless musical vehicle for Hearst mistress Marion Davies (so dreadfully dull here that it hardly seems the same actress as the vibrant and talented star of King Vidor’s wonderful 1928 silent comedy The Patsy) and an eerily young Bing Crosby, its witlessness and charmlessness all the stranger considering the cachet of Raoul Walsh in the director’s chair and Algonquin Round Table alum Donald Ogden Stewart penning the screenplay. Drearily following its directionless, paper-thin plot as wannabe star Davies follows crooner Crosby to the titular destination, the film obligingly and inexplicably reaches the crisis Rock-Bottom moment: after some head-scratching bump in their passionless romance, Crosby retreats to a bar in the company of shrewish French siren Fifi d’Orsay, whose previous advances have not even occasioned a raise of one drooping eyebrow throughout. Slumping against the bar in what is supposed to be alcoholic infatuation but more resembles an impotent narcotic haze, eyes focused intently in the unseen d’Orsay’s general direction, Crosby begins to sing Arthur Freed’s “Temptation.” And then, The Cut: to an extreme close-up of d’Orsay’s emptily alluring face, smiling lasciviously out at the viewer.

This sequence was curious enough when included in the 1976 clip-reel feature That’s Entertainment! Part II, but viewed in context it becomes even stranger. Bodies not even in the same shot, eyelines having no correlation to each other—Crosby staring vaguely off to the left while Fifi d’Orsay confronts directly the spectator’s gaze—the two pieces of film are linked only by the masquerade of passion voiced by the song, which, in absence of any causal explanation within the plot itself, becomes in effect the narrative engine of the scene. Bound together by this thinnest of pretenses, sound and image take flight from narrative meaning and direct themselves towards the purely fetishistic, taking leave of the film’s story world and addressing the audience directly; yet that very same taking leave is what dissipates the image’s fetishistic appeal.

Stripped of any traits of her former character, d’Orsay’s face becomes enshrined as love goddess solely through the logic-defying action of the cut; the viewer is thrust up against a contextless image purporting to entice their deepest carnal yearnings by sheer virtue of its assertive presence, regardless of any innate appeal therein. Unyoked from the film’s narrative by the unmeeting gazes of Crosby and d’Orsay across the void of the cut, the effect is one of disturbance rather than pleasure. Voiding its own prior meaning, the film attempts to provide the viewer’s dream directly, yet the very explicitness of manufacture undoes any possibility of audience gratification.

Was the cut occasioned by some perverse willfulness on the part of the filmmakers or some systemic contradiction? What matters is that sophisticated technique has revealed its utter ignorance of the mass emotions it’s trying to manipulate—has, in effect, provided an inner critique of its own workings. The rupture between the manufacture of industrialized entertainment and the elusive fluctuations of audience pleasure finds appropriate expression in a single cut, a bodiless non-thing marking the collision between Crosby’s distraction and d’Orsay’s confrontation, between casual viewer and grasping film. If studio knowledge of audience desires is what secures them their continuing power, it’s encouraging to note that that “knowledge” is as much (or even more) wishful thinking on the part of the studio as it is wish fulfillment on the part of the audience. 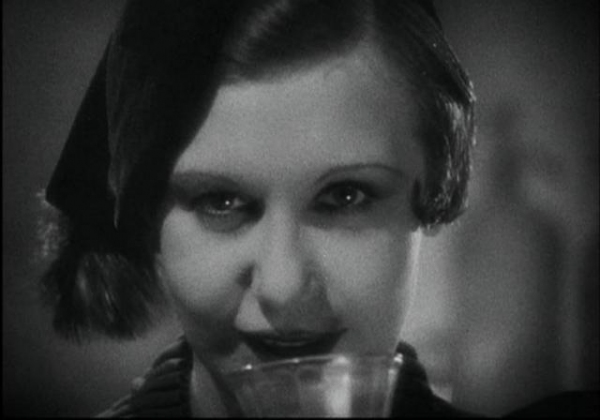