Nobody punishes college kids like Eli Roth. Starting with Cabin Fever's thorough inventory of wracked, diseased, and otherwise violated undergraduate flesh, he has dutifully wrung variations on the idea of the big, bad world taking it out on those who think it to be at their feet. Think, for instance, of the city-mouse backpackers of the Hostel films, whose methodical butchering at the hands of Eastern European nasties was interpreted by some cultural commentators as a subversive slice of anti-American satire. Even last year’s seemingly atypical Knock Knock, starring Keanu Reeves as a suburban husband subjected to some funny games by violent intruders, wound its way back to this basic conceit: its villains were avenging-angel coeds using progressive-feminist rhetoric to rationalize blackmail, torture, and murder. In his bid at Haneke-esque profundity, Roth lets them get away with it, scot-free.

Debuted at film festivals in 2013 and then shelved for two years until its distributor worked up the guts to dump it into movie theaters, The Green Inferno is probably Roth’s signature film to date: the one where his reverence for genre tropes and gory inserts jigsaws most snugly into place with his reactionary politics. Roth overtly explained in interviews that he meant the film—which takes its title and basic scenario from Ruggero Deodato’s Cannibal Holocaust (1980)—as a shot across the bow of online social justice warriors; in this case, it’s eminently possible to make like D. H. Lawrence and trust the tale rather than the teller. Roth’s lily-white campus activists recite speeches about progress and ecology and chain themselves to trees in the Amazon only to wind up captured, cooked, and eaten by the indigenous peoples they claim to be standing up for during their (drug-dealer-financed) South American excursion.

As a horror film, The Green Inferno has the requisite stomach-turning intensity, but as social commentary it’s every bit as superficial as the 21st-century identity politics it means to decry. Roth’s broad definition of “slacktivism” as the provenance of Tweeting twits (the main cast members’ Twitter handles are pointedly placed on the end title crawl) emanates from a position of privilege equal—or superior—to his liberal-arts-college-going characters. The fact that he’s written nearly every single one of his victims as a callow caricature shows he’s more eager to justify his punitive Grand Guignol instincts than examine the personal and political complexity of contemporary activism. As a dramatist, his credo could be #NoLivesMatter.

At times, Roth hits upon witty images, like when Justine (Lorenza Izzo) finds herself slathered in chalky body paint that ironically underscores her white-knight persona (she’s also protected at one crucial point while crossing a stream by a literal black panther, which may or may not be a great visual joke). But you’d ultimately have to be as bloodthirsty as #1 fan Armond White to slaver over Roth’s “ruthless reproof of the First World’s shallow ideologues,” as if decapitation, dismemberment, and genital mutilation are a fitting reprimand for the sin of repping a left-wing agenda. The fact that Roth surely means The Green Inferno as a joke doesn’t ameliorate a stench that should set off any and all audience bullshit detectors within a ten-mile radius.

A much fainter whiff of condescension also emanates from Polish director Michal Marczak’s 2012 feature Fuck for Forest, a documentary that in many ways anticipates and contextualizes The Green Inferno, to the point that I legitimately wonder if Roth saw it, or at least read about its subjects, while preparing his screenplay. But unlike The Green Inferno, it ultimately passes the smell test. I’d go so far as to say it’s one of the best nonfiction films about contemporary political activism, not in spite of its somewhat dubious point of view but because of it. Marzcak, whose beautifully composed 2010 debut At the Edge of Russia surveyed a far-flung Arctic military post, has a keen interest in the motivations and behaviors of young people plunging into extreme environments. Fuck for Forest both reflects and inverts this dynamic, following a group of environmental crusaders whose desire to travel to exotic spaces balances against the way they try to defamiliarize their own western habitats by striking the pose of outcast outsiders.

These poses are typically struck whilst stark naked; the members of Fuck for Forest are eco-activist-cum-performance artists. Their pitch is to approach strangers on the street to ask if they’d like to collaborate on short pornographic videos, which are then uploaded to their website: the videos are free to participants and require a credit card number for anybody else. As the film opens, they’ve been hoarding the proceeds in the hopes of donating the money to a worthy cause, a plan that gets mixed reactions from the strangers who hear about it. “I love nature, I love camping, I’m from Canada,” says one backpacker at a Fuck for Forest gathering in Berlin. “Even if you are collecting money, I’m not sure it’s going to change anything.”

While shooting Fuck for Forest, Marczak had seemingly unfettered access to the group’s members, who present an interesting opportunity for a documentarian: naturally exhibitionistic and prone to inflated rhetoric, they don’t exactly conceal themselves (literally or figuratively) in front of the camera. Marczak doesn’t resist the temptation to editorialize about his subjects, and at times his voiceover skirts overt mockery: “She could never understand,” he drones about one free-spirited young woman, “why other girls picked flowers, ripping them from the ground to watch them die.” In the early scenes, it seems that Marczak is at once critiquing and exploiting the enthusiastic, body-baring exploits of young Europeans who suspect—and based on the evidence, not wrongly—that their sexual libertinism is of interest to other people and, perhaps less plausibly, that it can be an engine of great social change.

As a study of a certain strain of late-adolescent narcissism, Fuck for Forest is bracing, but Marczak doesn’t give in to his chiding impulses. If anything, once the kids make it to Peru with 400,000 euros to distribute, he turns the film on its head to show the humiliation that can go hand in hand with good intentions. Addressing a community of natives, the group’s members make grand statements about living in harmony with the environment, which we see being poorly translated in real time. The response is not what they expect. “We have heard enough lies, especially from Europeans,” says one man. “Why have you come here? You are not understandable!” Marcazk cuts from the stricken faces of the activists to a man peddling a new electric chainsaw to the natives, who receive it more enthusiastically than their visitors’ philosophizing: the intended recipients of Fuck for Forest’s largesse would rather spend money on tools than accept an infusion of cash that they fear might compromise their ownership of the land.

In effect, Fuck for Forest makes some of the same basic points as The Green Inferno. The difference is that where Roth frames his fable as a comeuppance invited and then enacted upon nubile Western bodies—with the blood-red-body-painted natives used simply as props within the equation—Marczak gives the viewer space to consider several contradictory ideas: that Fuck for Forest’s rhetoric of spiritual and physical openness and communion with nature is clueless about the lived reality of non-urban cultures; that the line between charity and colonialism is perilously thin; that intentions are easily lost in translation; and that people have different thresholds for losing and regaining their principles. In the final scene, we see a chastened Norwegian recruit hunkering down with pro-Palestinian protestors and wondering what, if anything, his presence there means.

Contrast this with The Green Inferno’s smug final image of campus radicals putting on shirts emblazoned with the countenance of the doomed party’s corrupt, usurious leader. Roth may be trying to evoke the great, ironic ending of Cannibal Holocaust, where the survivor of a rescue operation leaves a television studio screening of the unfathomably violent footage he’d recovered wondering “who the real cannibals are,” except that Deodato—who admitted the influence of Gualtiero Jacopetti’s Mondo films on his own pseudo-documentary working methods—was to some extent analyzing his own practices. Roth wants to occupy the cozy niche of the genre filmmaker inveighing on real-world problems, to take his place in the cultural-studies-with-arterial-spray chair bequeathed by George A. Romero, and maybe to roll the sucker a couple of degrees to the right while he’s at it (one imagines that he trembles with indignation any time a sophomore puts up a Che Guevara poster anywhere in the world). If his M.O. is to breed another movie’s worth of (mostly white) lambs to the slaughter, that’s his business, but the spectacle of realistic-looking fake body parts being flayed and hacked away finally cannot compete with the evisceration of idealism on display in Fuck for Forest—a memorable horror movie gazing at the ravenous gap between self-presentation and self-perception. 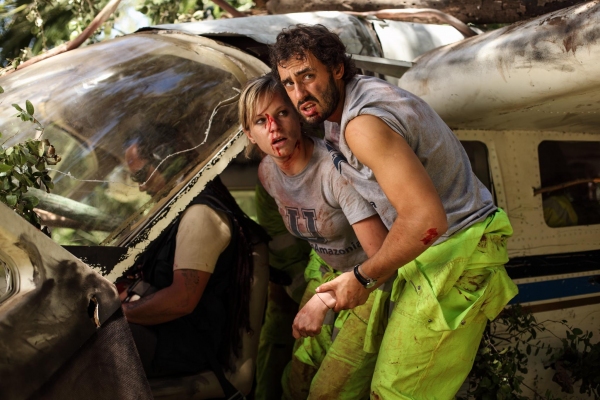