One, Two, Eyes on You
Chris Wisniewski on Approaching the Elephant and The Class

Every classroom is a battleground, contested terrain where power is exercised, challenged, and negotiated on a nearly continuous basis. The teacher, who serves as a proxy of both the state and the parent, has an ultimate responsibility to engage the young people in her charge in learning activities, but to do so she must exert authority constantly. Her success depends on the learners she educates being physically and mentally present, and so she must reprimand, cajole, and redirect, often in ways gentle or playful, sometimes with more explicit displays of force. Take, for example, the simple call and response employed in many elementary school classrooms to commandeer the attention of a group: “One, two, three, eyes on me,” the teacher says in a sing-song, and the kids will usually reply, in unison, “one, two, eyes on you.” This is discipline masquerading as a game, power hidden in plain sight.

At the risk of greatly oversimplifying a broad and diverse range of complex pedagogical theories, one might observe several dominant threads that run through progressive educational thought as it has evolved over the past century: the notion that children as people have a right to be active stakeholders in their learning environments, and the argument that learners learn best when their interests and needs structure their learning activities. A progressive pedagogue might see the teacher less as authority figure and agenda setter than as a facilitator and guide. This puts the learner at the center of the learning environment rather than the teacher.

Without trying to turn the classroom into a metaphor for documentary filmmaking or vice versa, we might also acknowledge a certain affinity between progressive pedagogy and certain aspects of direct cinema and cinema vérité. Both attempt to problematize, minimize, or even eliminate the concept of authority as embodied, alternately, by the teacher or the director. The teacher is no longer the sole author of the learning environment, just as the filmmaker is no longer the principal author of the film. The subjects, be they students or characters, become co-authors. This is partly but not purely a political maneuver, an acknowledgment of the dignity and autonomy of the subject. Setting politics aside, one might also argue that pursuit of these ideals makes for more effective and engaged teaching and more truthful and aesthetically rewarding movies, respectively. But power is still present, and in real classrooms and on real film shoots, there remains an inevitable tension between the roles that certain figures who exercise authority must play and the principles and aspirations that guide some of our most progressive teachers and moviemakers.

Approaching the Elephant tells the story of the inaugural year of a New Jersey “free school” established by Alexander Khost. Free schools represent an extreme form of progressive education where the students have complete authority over every aspect of their learning environment, managing the curriculum, schedule, and even facility collaboratively, largely through democratic meetings conducted with strict attention to parliamentary procedure. Directed by Amanda Wilder, who also operated the camera, this documentary has a loose, observational style, and with the exception of brief introductory and closing text, it does nothing to acknowledge the filmmakers or its authored-ness.

Shot in a grainy black-and-white, Approaching the Elephant takes a direct cinema approach perfectly suited to its subject. Near the beginning of the movie, Alex explains the concept of the school to young Lucy, telling her “It’s going to be based on your interests.” In a sense, the same thing goes for the movie. The kids are in charge here. We spend time with them as they go about their school days—working with power tools, jumping off a mattress, holding a garage sale. What they do has the feel of managed chaos, or rather chaos punctuated by structured meetings in the presence of adults where conflicts are arbitrated and rules are set. We see very little that resembles traditional teaching and learning. Alex and the other adults insist in their meetings that it takes time to make their system work and to establish a healthy, functioning democratic learning environment. Still, when one student performs a song with his armpit during the school’s Winter Solstice Showcase, one can’t help but wonder what the parents in the audience really think of the education their kids are receiving.

Because so much of the day-to-day of the school environment has no structure, at first the movie has a bit of an aimless quality, too, functioning mostly as an episodic character study focusing on Alex, Lucy, and school troublemaker Jiovanni. The fractious relationships amongst the three become the dominant threads to which editor Robert Greene repeatedly returns, and as the film moves toward its conclusion, Greene teases out a larger narrative that brings coherence but also somewhat undermines the unmediated quality and tone Wilder establishes at first. The “year in the life of the school” becomes a mini-drama about the power struggle between school leader Alex and unruly Jiovanni. Alex, who begins the school year appealing to the children’s loftiest instincts (“You need to respect other human beings,” he insists), concludes by issuing the kids an ultimatum: complaining that “[Jiovanni’s] personally offended me on a daily basis,” Alex tells the school community that they need to expel the troublemaker or that he will leave the school.

The conflict between Alex and Jiovanni dominates the last half of Approaching the Elephant’s brief 89-minute run-time, and to some extent this comes at the expense of the film’s attention to the other students or the school as a whole. The Teddy McArdle Free School did not survive, but however much Alex and the other adults bemoan the toxic influence of Jiovanni, surely his presence and expulsion were not the sole or even the primary reasons for the school’s failure. From a pure movie perspective, though, the interest and the drama is in the power struggle. Sensing this, Wilder and Greene focus on the difficult wild child and the idealistic school leader who is committed in theory to children’s self-rule but finds himself in the awkward position of asserting his needs and demanding punitive action against a student in order to advance his own goals and interests. This casts Alex as the compromised protagonist and Jiovanni—a troubled child, to be sure—as antagonist, and since Jiovanni lacks the patience, awareness, and experience to hold his own against a self-reflective adult, he loses the expulsion vote and the battle for sympathy in the world of the film. The deck was stacked against him from the beginning, though, and it is impossible to imagine a version of this narrative where Jiovanni’s frustrations and concerns, justified or ridiculous (he is, after all, a child), hold equal weight.

Laurent Cantet’s Palme d’Or winner The Class is ostensibly a work of fiction, but its depiction of a school year in a racially diverse high school classroom in the 20th arrondissement of Paris has much in common with Wilder’s film. Like Approaching the Elephant, The Class confines itself almost entirely to the school and primarily to the interactions among the young people and the adults whose job it is to educate them. Also like Approaching the Elephant, The Class shifts from being a year-in-the-life-of-a-school to focus on an extended episode involving the expulsion of a challenging student. The Class even employs a handheld documentary-style approach and features a cast of amateurs, including young people who mostly share their names with the characters they play and, in the lead role of teacher François Marin, François Bégaudeau, the author of the autobiographical novel on which the movie is based.

The black-and-white, direct cinema aesthetic of Approaching the Elephant is a bid at a particular form of perceived authenticity. The casting decisions, improvisational tone, and handheld technique of The Class can be seen in the same light. Both films aim to reveal something real and true about the combustible learning environments that they depict. And yet: who is doing the depicting? Who is controlling the narrative?

Throughout The Class, Mr. Marin negotiates his authority as a French-language and literature instructor with the racially and ethnically diverse teens in his classroom. He quizzes them on the imperfect indicative, and they push back that no one actually speaks in that manner. He gives an example using the name “Bill,” and they wonder why he didn’t choose a name that sounded more like theirs, underscoring his whiteness and the undercurrent of racial tension that underlies their interactions. Since these kids are older than the ones in Approaching the Elephant, they are more equipped and able to articulate an oppositional stance, to directly challenge Mr. Marin’s authority and speaking position.

The incident that results in the expulsion of Souleymane (Franck Keïta) escalates because Mr. Marin, in a moment of poor judgment, accuses two female students of behaving “like skanks.” That Marin bears some direct responsibility for Souleymane’s indiscretion and that he fails consistently to effectively bridge the racial gap between him and his students compromises him as our protagonist and surrogate. (Just as Alex’s tendency to personalize his conflict with young Jiovanni compromises him in Approaching the Elephant). Yet the first image of The Class is a shot of Mr. Marin sipping coffee in a café. Compromised or not, he is our entry point to this narrative world. Self-aware—or even self-critical—though he may be, he is the author of the primary text. The Class tells his story, much as Approaching the Elephant tells Alex’s. The kids orbit them and intermittently wrestle them for authority. But the educators are in control; our eyes are on them.

One of the great joys of being an educator is the daily realization of how much is contained in each and every minute of one’s work. Moments of teaching and learning are caught up in questions of politics and justice; they respond to and exist within sociological realities; they are shaped deeply by the history of ideas and human thought and accomplishment; they create the future. It would be unreasonable to expect any movie, whatever its aspirations to “authenticity,” to capture the complexity and nuance that is an everyday aspect of the classroom. By this standard, both Approaching the Elephant and The Class surely fail. If, however, we view them as portraits of smart, complicated, and flawed men who are committed to making a difference through education, both movies and their relative merits take on a different meaning. We might argue that both are more about men struggling with their power than about education per se. And we might acknowledge that these films meaningfully complement, in their human focus, the more systemic perspectives of perhaps the greatest American education-themed moving-image works, Frederick Wiseman’s High School and the fourth season of The Wire. (And just imagine how different an essay comparing these works would be from this.)

The Class ends on a heartbreaking note. As the vacation begins, a student approaches Mr. Marin to tell him that she learned nothing all school year. He responds incredulously. In his mind, such a claim is, quite simply, absurd. But whatever the outcome of the battle, the war has already been lost. Here is a young person who no longer sees herself as co-author of an educational experience that will enrich her life, broaden her perspective, and prepare her for the future. That failure isn’t hers or his alone. It’s ours. 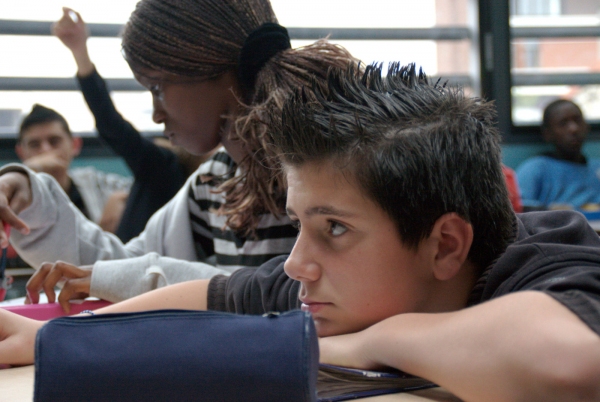