Morgan Fisher’s Standard Gauge (1984) is an experimental film best known for its compositional rigor, but I want to take a moment to consider its meandering monologue. For all of the film’s formal austerity, which consists of a fixed and narrow frame through which various strips of 35mm film scroll by, Fisher’s voiceover, which offers a kind of wry show and tell, is surprisingly digressive. A case in point: when Fisher, the unseen filmmaker, slips into view a few frames of 35mm film bearing the title of Edgar G. Ulmer’s The Naked Dawn (1955), he uses this as an occasion to comment on another Ulmer film, the noir classic Detour (1945). Specifically, he seizes on the moment when Al (Tom Neal), a fugitive on the lam, predicts in voiceover the arrival of a police car that occurs a moment later, within the same shot. Fisher remarks: “His shifting to the future tense makes the scene jump forward, revealing as a certainty the outcome that the character’s fatalism has long foreshadowed. And yet this disjunction in time, a kind of ellipsis into the future, takes place within a single continuous shot.” There’s a kind of filmic ellipsis that follows this rumination, too: no sooner does he complete his sentence than The Naked Dawn filmstrip begins to spool jerkily upward, the titles and countdown leader behind it blurring and fluttering until they’ve completely left the frame.

The voiceover detour here, as in Detour, is no accident, and instead leads us to the heart of the film. The temporal structure Fisher describes—a disjunction in time accomplished within a single shot—comprises the structure of Standard Gauge itself. In one continuous long take, Fisher exhibits bits of film he collected from various jobs he worked in the postproduction sector of Hollywood during the late sixties and seventies. His account is retrospective, dating back to his first time handling a piece of 35mm film in 1964, the year he moved to California and attended film school at the University of Southern California, and moves chronologically forward. In this way the time is doubled: moments from the past rush to the present, pause, then speed away, all while the long take continues rolling.

Like Bruce Conner’s A Movie (1958), one of the many films Fisher references, Standard Gauge is made up of found footage. This includes, as Fisher tells it, the somewhat miraculous retrieval from a disposal bin a snippet of camera original nitrate negative containing an image of the Hindenburg zeppelin, which also appears in Conner’s film. Instead of stringing together clips of educational and newsreel footage as Conner did, however, Fisher displays these fragments as objects, filling the frame with strips of 35mm. The filmstrips are not spliced together, but moved around as individual fragments, each of which is pulled upward by an offscreen take-up reel. Standard Gauge runs strips of footage across a lightbox, stopping long enough for Fisher to recount a story or offer an aesthetic comment, before spinning away.

As its title implies, Standard Gauge is explicitly about 35mm film, but Fisher filmed with 16mm, which is generally associated with experimental, educational, and amateur uses of celluloid. We see two framings: the one within the 35mm filmstrips, namely the Academy aperture of 1.37:1 that was standard for Hollywood productions during its classical period, as well as the 16mm framing that maintains this aspect ratio and, in another sense, extends it, allowing us to see beyond the compact frames of 35mm to their optical tracks, sprocket holes, countdown leaders, and other marks that make their way onto the margins of a film. Furthermore, Standard Gauge, at 35 minutes, was made using a 1000-foot reel of 16mm film (the running time purposefully matches the film’s subject; Fisher has often called himself a “literalist”). This extensive length occasioned, for Fisher, a complex orchestration of time and footage: in another of Standard Gauge’s many film references, we see a title card for Hitchcock’s Under Capricorn (1949), a film that Fisher has admired for its precise plotting of action according to the limitations of shot length. Thirty-five minutes is the longest possible take one can make with 16mm, and it well exceeds the durational capabilities of 35mm. In more than one way, 16mm does what 35mm cannot do.

By foregrounding the material of the filmstrip itself, Fisher draws a connection between the behind-the-scenes world of commercial filmmaking and the literal edges of the frame. Standard Gauge plays with the idea of the margin: the spaces to the side and behind a film, both materially—as in the optical track and perf marks that lie on the edge of the filmstrip—and culturally—as in the economic mechanism that includes studios, archives, film labs, optical houses, and all manner of acknowledged and unacknowledged laborers. The margin Fisher occupies extends also to the position of experimental film. This is expressed on the level of the film’s 16mm format, which, far from existing in a realm separate from its commercial 35mm cousin, is largely dependent on many of the same technologies and production conventions. As the film’s opening text suggests, the standardization of the 35mm format in the early 20th century determined the shape of many auxiliary film practices, including the adoption of the same Academy aspect ratio for 16mm film. As a format that, in large part, results from the practice shaped by 35mm, 16mm becomes a privileged optic for viewing the industry in a way it could never see itself.

What is revealed in a sequenced unspooling, then, is a reverse view of Hollywood, seen from its various margins. From the late sixties to the early eighties, the period Fisher describes, the industry itself was beset by profound change. Though we have become accustomed to the more recent proclamations of the death of cinema brought about by the digital revolution, film was already a disappearing medium in 1984,the year of Standard Gauge’s making. Fisher describes numerous instances where he serendipitously stepped in to rescue a cache of 20th Century Fox bumpers or save a 1000-foot roll of discarded The Band Wagon trailers from “mutilation” by “meat cleavers.” In what is simultaneously one of the most touching and eccentric “scenes” in the film, Fisher recounts the appearance of a memorial announcement, most likely taken out by Fisher himself, which appeared in the Hollywood Reporter saying, “In loving memory: IB, born 1927, died 1975. Hollywood’s own dye transfer process whose life was unrivaled for beauty, longevity, and flexibility. We salute you.”

In Standard Gauge, Hollywood is not a smoothly functioning, monolithic machine, but an uneven, indecisive (as demonstrated by Fisher’s discussion of the multiple names, including Blood Virgin and The Second Coming, that were once given the cult 1975 film Messiah of Evil), and often provisional economic operation. Institutional memory is dim, if not entirely absent; at the very least, Hollywood in this account doesn’t seem to value its own history. As Fisher describes, the stock footage library where he briefly worked in early 1970 on a never completed project for Haskell Wexler, had changed dramatically by the time he returned ten years later. The facility had considerably raised its rates for viewing copies, and, as Fisher discovered, was discarding considerable amounts of footage, including the Hindenburg image, a piece of footage whose historical value only Fischer seemed to grasp.

Standard Gauge is a lonely film. It can often appear that Fisher is the only one is tending the history of the film industry, or at least these less glamorous aspects of it. There are just two images of Fisher in the film, both from distorted outtakes from Messiah of Evil (in which he played a bit part as an art gallery assistant), and it is this lanky and awkward figure we imagine behind the camera of Standard Gauge: hunched over, pulling out scrap after scrap, and tenderly searching for the traces that might tell a deeper story than what’s on the surface of the image. One ribbon of leader Fisher retrieves contains a series of “interesting incidents, none of them related to one another”: the word “FINISH” in blotty lettering, a solid purple frame, and a China Girl, a smiling and anonymous woman that serves as a reference image for laboratory processes and who, Fisher explains, is “emblematic, almost, of film itself.” These random elements are accumulated through multiple dupings and splices, and together they form a record of the industry’s unconscious inscriptions.

Standard Gauge is also one such record, though it is far from complete. However meticulous in his details, Fisher offers an account that is idiosyncratic, personal, and full of gaps. More than once, he admits he no longer remembers where a piece of footage was found, or what film it came from. These are the trinkets of a journeyman’s collection, meaningless to all but a diminishing few. Fisher’s tone can’t help but seem a bit melancholic, and after Standard Gauge, he turned chiefly to painting and sculpture, not making another film until () in 2003. A collection of insert shots, () opens a space analogous to the “scene missing” placeholders described in Standard Gauge, when, during the editing of Messiah of Evil, these frames would be used to indicate places for effects shots and pickups that would be added later. Fisher pauses on the poignancy of their graphic quality, but I’m struck by the way these “scene missing” frames, placed within the context of Standard Gauge, mark a spot for those fragments he can’t find or can’t remember. Against forgetting, these frames insist: there’s a history there, even if we no longer have the pieces to put it entirely back together.

This essay is also featured in Reverse Shot’s In Space symposium. 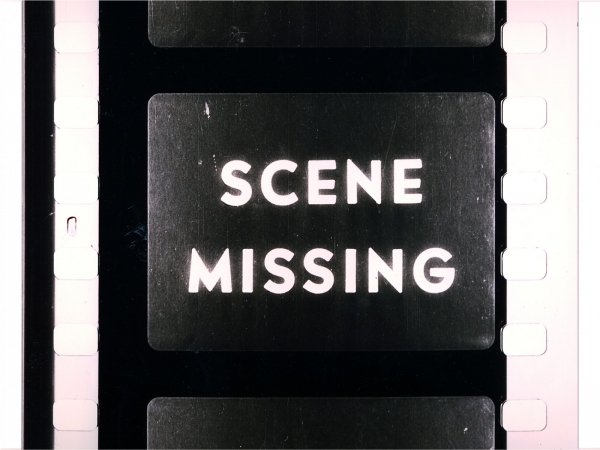