The Eyes Have It
Jeff Reichert on Au hasard Balthazar

The Robert Bresson of my mind always announces himself through the formal rigor of his shots. Remembering the incredibly compressed period (the course of a semester) during which I watched all of his features conjures a stream of static compositions jutting at odd angles from their subjects, the camera often positioned so that crucial information has been carefully, concisely elided. When I rewatch any of his films, I generally find my mind’s eye lacking somewhat in accuracy. Bresson will move his camera—tilts, pans, and trucks don’t necessarily abound, but they do exist—never excessively, but his films, excluding his most static movie, The Trial of Joan of Arc, are never excessively still, either. Rather, what’s so striking about the Bressonian universe, and probably most responsible for his lasting reputation, are his editing decisions; it’s rare that a shot ends exactly when you might expect it to, and even rarer that what follows provides easy linear causality. These films eschew those niceties offered by other filmmakers—like establishing shots, continuity, and unity of time and place—in favor of a plunge through space and chronology that disorients as often as it exhilarates (the former often leading to the latter). This is not to say that Bresson’s films are imprecise, however, as each of these decisions reveals perfect calibration upon repeat viewings. Bresson is most often discussed in terms of his ruthless attempts at paring away to essences (well documented in his Notes on the Cinematographer); editing may be the arena in which he’s enacted the most violence upon traditional cinematic form.

Each of us are probably hardwired as viewers to recall a single shot more easily than a cut, thus making this assignment somewhat more difficult than our previous attempt at grasping the constituent pieces of film form. This is exacerbated by the fact that, at its most elemental level, the cut is not something visual at all—the nonexistent space between two shots, it’s a lack more than anything—and there’s a commensurate mental leap necessary to bridge this absence after the fact, an extra effort required to visualize an image, and then go a step further to piece it with what follows. This explains my mistaken memories of Bresson; his films are less about the shots themselves, and rather more about how he obliquely prioritizes information, creates exchange value between shots, and communicates immense amounts of meaning through the absence of visual cues. The result is a slippery cinema—his narratives feel clipped and unsatisfying until fuller immersion reveals the vast expanse of cinematic potential opened up by his edited elisions. Often tagged with the minimalist label, his films usually get reduced to only the simplistic reading of the definition: something consisting of only a few elements. Of course it’s the intentionality of minimalism that is what’s valuable—that idea, no different in Bresson’s cinema than in the paintings of Rothko and LeWitt, Mies van der Rohe’s “Barcelona Pavilion,” or Beckett, that combinations of fewer elements can actually produce expanded meanings by changing the onus of reception; instead of admiring skillful gestures, we’re left to ponder and test our own reactions.

So it goes time and again in Bresson’s thirteen films—the barest of storytelling bones wind up at a place utterly devastating (excluding his odd pseudo-romantic comedy Four Nights of a Dreamer). Arguably his most tragic work (though neck-and-neck for that title with almost every film that followed), Au hasard Balthazar came at the exact midpoint of his feature filmmaking career. With the cool abstraction of The Trial of Joan of Arc behind him, Bresson revealed in Balthazar a more fluid yet wildly elliptical filmmaking style that would blossom throughout the rest of Bresson’s career.

It’s a testament to the aforementioned slipperiness of Bresson’s cinema that this cut wasn’t even the one I’d initially planned on examining; it turned out upon reviewing Au hasard Balthazar that my planned pair (a late shot in the film of local thug Gerard and his gang running from their hideout and flinging women’s clothing, followed by a shot of his sometimes-girlfriend Marie, naked, huddled in the corner of the shack) didn’t butt up against one another at all. Marie, Balthazar’s first owner, a pure soul whose unlikely obsession with Gerard leaves her shattered and stranded, remains indelible, and in this shot, her spiritual desolation is absolute. Bresson won’t show us what transpired in that room, and only briefly deals with it in a bit of dialogue, but he doesn’t need to, and this is where the wonder of all his great films stems from

The pairing of shots from Balthazar that I’m interested in here couldn’t be simpler: a medium close-up of the left side our donkey protagonist Balthazar’s face, followed by a similar close-up, this time of an elephant’s left eye, camera positioned so closely that the orb looks alien amidst a sea of leathery wrinkles. The cut comes at about three-quarters of the way through the film, as Balthazar arrives at yet another home, this time as a member of an erstwhile circus troupe; the cutting throughout the sequence is particularly obtuse, so it’s impossible to tell if the two are looking at each other (in fact, they almost couldn’t be given the way the shots are constructed to break the typical 180-degree editing rule), or are even occupying the same space. Yet the sense of some shared empathetic communion, even if it’s a communion wholly alien to human viewers is palpable. Each shot lasts for mere seconds, but Bresson, ever the good “minimalist” has created a mini-essay on the power of editing to create meaning where none existed, and in this instance used a moment of completely foreign communication to drive his point about his apparatus home: cinema always speaks, sometimes even in languages we can’t begin to comprehend.

Throughout Au hasard Balthazar, Bresson employs that most traditional of cinematic devices—the reaction shot—to incorporate Balthazar’s silent observation into the emotional fabric of the film. We don’t, and can’t know what the donkey is thinking at any given time, but don’t need to because the editing does the work for us. Bresson’s use of Balthazar is almost as simple as the legendary Kuleshov experiment, which transformed the image of a man’s face into happy or angry depending on the image that was placed next to it—Balthazar’s inert visage (the donkey was a nonprofessional animal actor to boot) is inscrutable when considered in isolation, yet the film’s construction burdens it with emotion, usually sorrow. It’s clear that Balthazar is generally displeased with the state of humanity, though his gaze is never harsh or judgmental, only mournful in its inability to effect change. If it weren’t so, Bresson’s conclusion, which finds Balthazar slowly bleeding to death in a field of sheep, wouldn’t hit like a brick.

Placing a nonhuman protagonist at the center of Au hasard Balthazar instead of focusing on any of the constellation of human characters that enter the donkey’s orbit necessitated radical reconsideration of the place of editing in film language. He may be a donkey, but he’s our avatar through the film nonetheless. Balthazar’s main role is to stand as mute witness to, and sometimes bear upon himself the brunt of humankind’s foibles, weaknesses, and brief flashes of goodness; he can’t talk to the audience (even if his intermittent braying speaks volumes), but Bresson’s editing choices throughout push the limits of filmmaking as a universal language by legibly and plausibly rendering the inner life of an animal. (Robert Bresson most likely couldn’t communicate directly with donkeys during his lifetime, but Au hasard Balthazar might convince otherwise.) Of course, we’ll never know exactly what passed between Balthazar and the elephant, the other animals met upon his entry into the circus, or even between he and Marie in his most tender moments, but the film leaves a sense of something consciously felt between the donkey and all of those he encounters. I’d normally hesitate to label a donkey soulful, but Bresson performs yeoman’s work in making the unlikely possible: Balthazar remains one of cinema’s great tragic heroes. 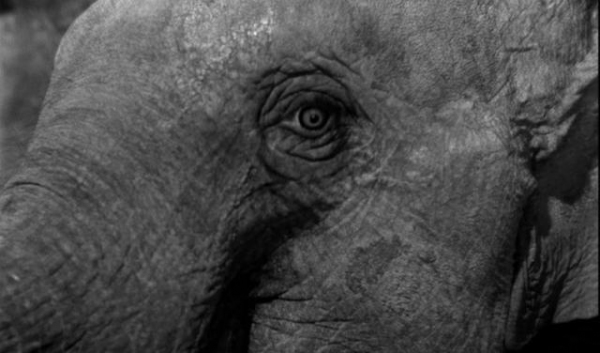