Beyond Words
Chloe Lizotte on Ridge

Ridge played at Museum of the Moving Image's First Look Festival in March.

On a rainy April morning, John Skoog sends me a few folders of behind-the-scenes stills from his film, Ridge. I click through them. The camera dolly is the focal point of several: a metallic track elevated on jagged wood, all sharp edges atop fields and forest floors. It’s at first glance incongruous with its environment, yet also seems an outgrowth of it, as if its absence would be felt otherwise. The sight evokes a sequence from Ridge that’s framed through the front windshield of a tractor at night. Its headlights harshly illuminate the deep green of the trees, while a mechanical arm begins to extract and devour the trunks with a harsh grinding noise. Despite that violence, the impression is not a simple clash between machinery and nature. The arm behaves in an almost lifelike manner—an ocean-floor organism gorging itself. 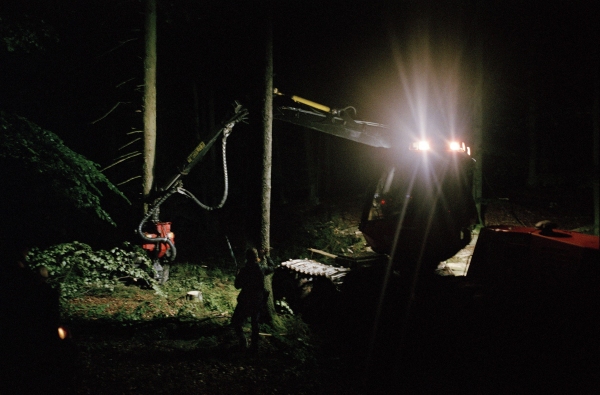 A few weeks have passed since I first met Skoog at the True/False Film Festival in March, just a week prior to Ridge’s New York premiere at the Museum of the Moving Image’s First Look Festival. He raised the idea of an “alien camera” to describe the viewpoint he brought to Ridge, his first feature within a corpus of short films, photography, and installations. If the film is “about” the 700-year-old rural Swedish village of Kvidinge, which is close to the town where Skoog grew up, it’s crafted to avoid the clichéd ways that its landscapes could be photographed and interpreted. Skoog name-checked The Man Who Fell to Earth during our conversation—“I think it should be required viewing for filmmakers”—and Ridge shares something of Nicolas Roeg’s ability to estrange the familiar into a set of dazzling elementals, as though landing on a new planet. But instead of displacing pastoral idealism onto that newness, Skoog brews something anti-verbal from the rhythms of its ecosystem.

Ridge grew out of a photography project: Skoog, who had taken portraits in high school, ventured to Kvidinge about ten years ago to document the townspeople. The end result struck him as “too good”: the polished aesthetics of the photos fell flat, but as he got to know his subjects, their individual stories about their hometown hinted at other possibilities. He told me, “I asked them to write down these stories, but with three rules: they had to be about the place, they had to be no longer than one page, and they had to be true. Obviously, all three rules were broken. But I found that the version of the place I wanted to explore was in the spaces between the stories.” 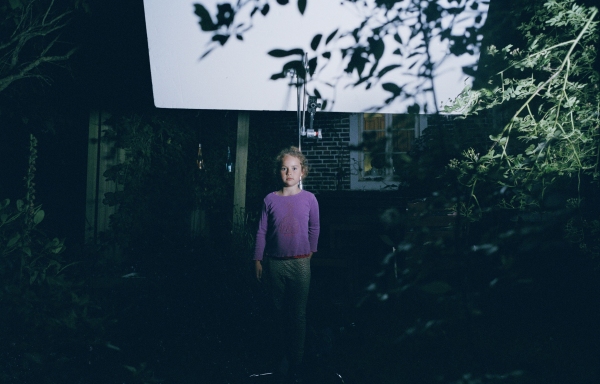 After a table reading of these pages, Skoog decided to build a Kvidinge-centered film around them. Throughout Ridge, the village’s residents read their stories in voiceover, almost as if they are flowing out of the landscapes. The gamble is that an affective sense of place might emerge somewhere between the image and sound, and in enigmatic overlaps, Skoog wears down straightforward relations between town and country, animal and human. As several tales allude to the eponymous “ridge,” an ambiguous plateau in the forest, they can add a folkloric haze to the visuals—for instance, a dolly past a pen of pigs grows ominous when paired with a tale of a reclusive hermit on the ridge whose rabbits were skinned by the townspeople after his death. The first story, of a cow vanishing from a farm and, according to hearsay, reappearing on the ridge, unfolds over a black screen and simmering electronic percussion; Skoog, a drummer, collaborated on the ambience-driven sound design with David Gülich, a composer with roots in the Swedish noise scene. A disquieting confusion arises over whether the cow is rebelling against herd instinct and the alleged nature of its apparition—all related to the futility of conventionally psychologizing it. After a full minute in suspension, choppy waves fill the screen as Skoog places us inside a boat, where a handful of people, all at a distance from one another, are dozing en route to Kvidinge. These solitary slumberers—migrant workers traveling to Sweden—summon ideas of belonging that exert a pull throughout the film. That thread is tapped by another story that introduces a recurring character, a young man from Poland (Mateusz Wieclawekvertly, one of a handful of professional actors in the film), who recounts drunkenly torching a car with a group of friends. He fled and never told anyone, but that burning car reappears later in the film, like déjà vu, or a spectral doubling-back within an associative web. 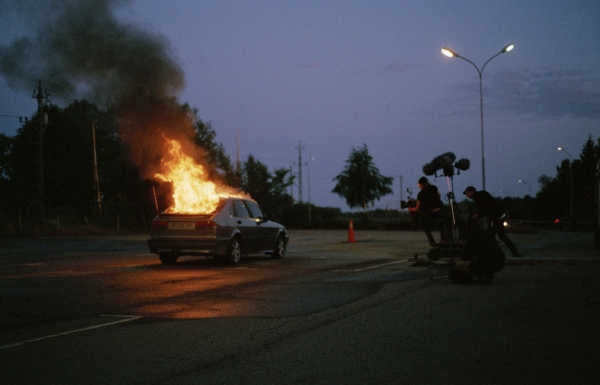 “Intention as mood,” as Skoog puts it, drove the Ridge shoot, which permitted this kind of structure. This ethos also pushed the crew to reject what he terms “Dardennes disease”: a handheld, grainy tendency of social realism that implies the film is less mediated. Instead, he and his frequent cinematographer Ita Zbroniec-Zajt bring a boldness of style through dramatic spotlighting and a dolly setup for every shot, even stationary ones. When it comes to Ridge’s abstractions (an overhead shot of a plow descending into wheat resembles a pinballing particle generator), Skoog cites Sacha Vierny’s close-ups in Alain Resnais’s short Le chant du Styrène (1959), in which the production process of a polystyrene factory suggests plants sprouting in time-lapse. All of this coaxes Ridge toward a space between fiction and nonfiction, especially when it comes to depicting the region itself. Scenes of a teenage boy (younger brother Aron Skoog) walking across a wheat field, set in the evening with an eerie post-sundown glow, as he lights a cigarette by the camera in silhouette, evoke Néstor Almendros’s twilights in Days of Heaven; a young girl running through a lifeless row of identical suburban houses, knocking on each door, only to receive no response, could set the scene for a David Lynch short (especially its underlying, crescendoing wind). As these moments accrue with only elliptical conventional continuity, though, the subjects/characters seem unmoored from the safety nets of narrative or each other, and their society, however sturdy, doesn’t seem to tame or elucidate the world surrounding it. 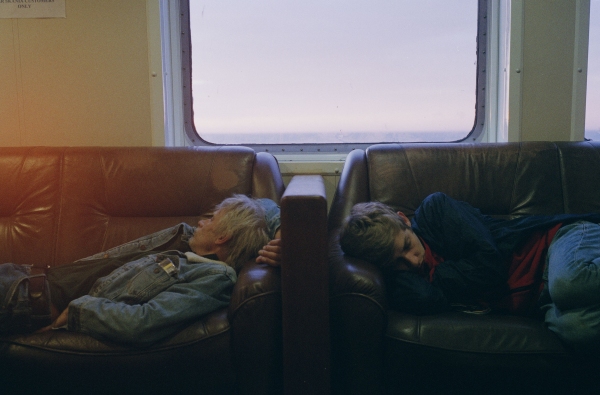 Skoog, who teaches film at the Art Academy in Mainz, Germany, is curious about the unrulier possibilities of the medium. Among his influences—Chantal Akerman, Maurice Pialat, Agnès Varda—he mentions he’s drawn to the conflict between “freedom and control,” a give-and-take between vision and execution. And while many vignettes in Ridge are conceived with a scripted concept in mind—Skoog co-wrote its scenarios with Polish playwright Anna Karasinska—they’re engineered to steer off set tracks. A scene that starts out with Wieclawekvertly’s character getting a haircut ramps up into an absurd pantomime of masculinity and cultural assimilation, as a sloshed onlooker goads him to act out an imaginary flirtation with a shopkeeper (“You have to create a magical atmosphere,” the older man needles the younger one as he fumbles through imperfect Swedish, while his barber plays the girl behind the counter with a weak falsetto). The sequence is set outdoors, at sunset, and its sparseness centers its commentary on immigration in power dynamics. Elsewhere, Skoog unsettles the regulated rhythms of modern agriculture, driven by lurching computer-controlled machinery, as in a scene where several farm workers attempt to corral two straying cows. The animals seem blankly confused, and the people, trying to surround the cows without startling them, appear increasingly wary of how they might react, and uncertain murmurs build as they walk toward the camera. The cows aren’t exactly threatening, but the scene conjures the tale of the two who absconded to the ridge, and hits home a discord that the animals aren’t in their proper place—a construct that calls into question the supposed authority of the humans. 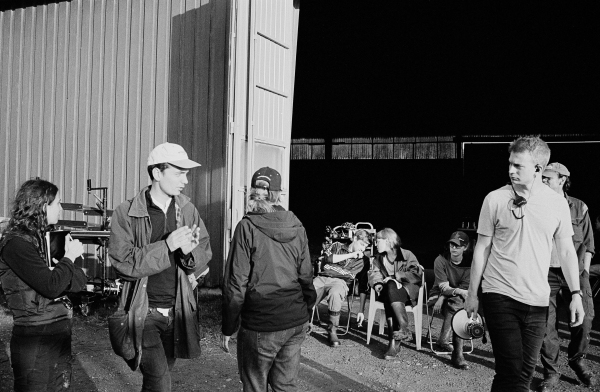 This sort of thought process recalls Skoog’s earlier work, which spans from photography to participatory theater. When we meet, Skoog hands me a catalog that accompanied a 2015 exhibition of his work in Vienna; it includes archival scans and original writing from the likes of Anne Carson, but my eye goes to black-and-white production photos from his short Redoubt (2014), which focuses on an abandoned bomb shelter built by a reclusive farmer in southern Sweden. In retrospect, Redoubt feels like a study for Ridge: as Skoog and Zbroniec-Zajt drift the camera through the house on a dolly track, we hear locals’ distant impressions of him in voiceover, especially about his tirelessness as he fortified the structure—intended as a community shelter in case of a Soviet nuclear attack—from the ’40s through to his death in the ’70s. We’re confronted with the physical evidence and collective narrative, but the images lack the very person that binds it all together; abandoned spaces force us to supply the life that existed there. And again, in the production stills, the dolly takes center stage, a decisive material trail of the filmmaker’s presence. 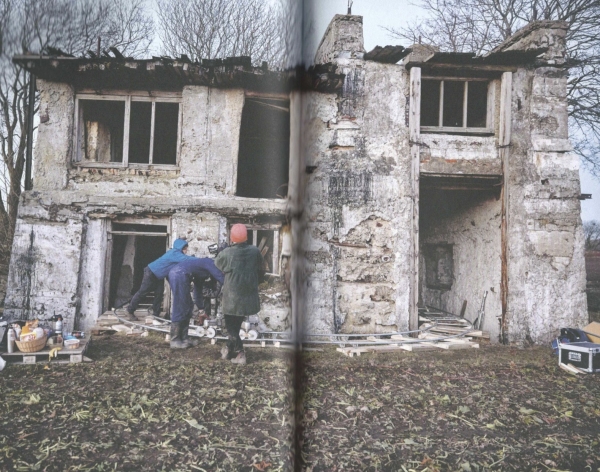 That filling-in-the-blanks is a subconscious process. As the soundtrack melds ambient natural sounds with rhythmic machinery, the milieus themselves are interwoven, and the farm sits at the intersection of humans, technology, animals, and nature. The figures look slight within natural surroundings—the exact geography is hazy, but we become familiar with its fields and forests and valleys, extending as far outward as the eye can see. There’s a way in which Ridge surrenders to that scale; when children play tag in a thicket of tall, leafy plants, they’re glimpsed from afar like animals running through the brush. But a pervading unease makes the balance of this environment precarious, and the humans’ bond to a social structure seem tenuous: the camera glides over tables of discarded, nostalgic yard sale ephemera, while the subjects Skoog follows the closest end up on the fringes of group gatherings. As that world seems less stable, the implication looms that technology and industry irreparably threaten the land we still very much depend on.

Skoog sends me one last link, and it transports me to a recording of a 2008 lecture by Timothy Morton, a philosophy professor at Rice who specializes in “uncanny ecology”—some audience members recommended his book to Skoog after festival screenings of Ridge. It’s a quick-moving but fascinating recording: for Morton, any engaged ecological worldview has to collapse the hierarchy between humans and their environment, which “enables the uncanny,” a jolting recognition of oneself within another, the familiar within the unfamiliar. In other words, there is no meaningful distinction between subject and object, which makes our relationship with nature, in Morton’s words, a lot “weirder.” That weirdness in Ridge distorts our accepted sense of the world around us, where machines seem alive, people and animals become creatures of id-driven instinct, and nature seems hyperreal. The separations are no longer so simple. When the film concludes with Aron Skoog’s character coming face-to-face with two cows in a wooded clearing, the sight seems familiar—it dredges up that story from an hour ago about the cow absconding to the ridge—but sense-memory makes the effect stranger still. There isn’t a revelation to come from the natural world, but a baseline of interconnection, as fundamental as it is cryptic, that we might forget at our peril. And, as if to prove his point, behind one of the theaters at True/False, Skoog spotted a tractor identical to the one that appears in Ridge. 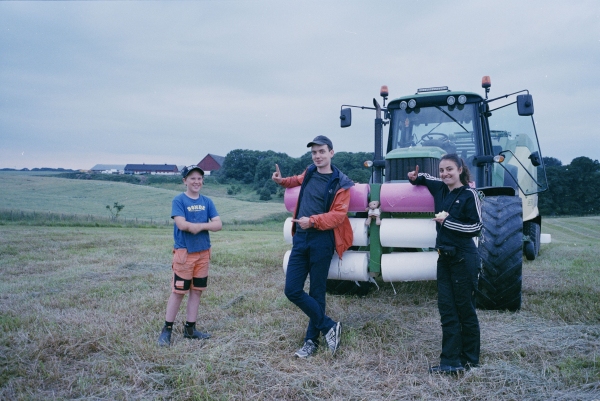