We have turned to the movie musical in times of social unease, more or less, since the invention of the talkie. So it should be no surprise that a Depression-era song-and-dance picture like the 1933 Busby Berkeley/Lloyd Bacon film Footlight Parade offered me a measure of solace this week, as we sit perched on the precipice of another economic catastrophe to rival the thirties. So dazzlingly wacky are Berkeley‚Äôs climactic numbers like ‚ÄúHoneymoon Hotel,‚ÄĚ featuring a mischievous Billy Barty terrorizing couples at a disreputable spot for horny newlyweds, and ‚ÄúShanghai Lil‚ÄĚ with a yellow-faced Ruby Keeler as the prostitute who stole Navy guy Jimmy Cagney‚Äôs heart, that you might actually forget your troubles for at least a few minutes. Berkeley basically perfected the musical number as escapist utopian fantasy.

It‚Äôs a little more difficult to set aside the jaw-droppingly casual racism‚ÄĒCagney‚Äôs Chester Kent conceives the famous ‚ÄúBy a Waterfall‚ÄĚ number after seeing a group of African American children playing at an open fire hydrant, and remarking how extraordinary a similar scene would be if it featured ‚Äúbeautiful white bodies‚ÄĚ‚ÄĒbut‚Ä¶ Well, I actually have no way of resolving that sentence. The racism is just a problem. It is also, however, illustrative of a latent tension in the musical genre, its inability to ever fully resolve its impulse towards melodic rhapsody with the messiness of real people and the repressive, oppressive, dysfunctional social structures they create.

As the genre matured, its most savvy purveyors didn't shy away from this contradiction. Few did so with the stylistic panache of Jacques Demy, who with late sixties classics like The Umbrellas of Cherbourg and The Young Girls of Rochefort blew up the genre while offering some of its sweetest virtuosic delights, abetted by the incomparable composer Michel Legrand and luminous performers like Gene Kelly and Catherine Deneuve. This project reached what was perhaps an apotheosis with 1970‚Äôs Donkey Skin, a (quite literally) perverse fairy tale musical that found Demy once again working with Legrand as well as Deneuve, cast here as the na√Įve princess of a kingdom where the horses‚Äô fur has been dyed deep blue, to match the clothing of the court, and where the king‚Äôs magical donkey shits gold coins. Given the title, it‚Äôs no spoiler to disclose that the donkey meets an unfortunate fate, though this particular plot point has only passing significance.

In Donkey Skin, Demy leans heavily into the most twisted aspects of Charles Perrault‚Äôs source material. On the queen‚Äôs deathbed, the king promises that he will only remarry when he finds a woman who is her equal in beauty and grace. After searching high and low, the king eventually discovers that what he‚Äôs looking for has been right under his nose all along‚ÄĒafter all, his daughter looks exactly like a 27 year-old Catherine Deneuve‚ÄĒand so he proposes marriage to the princess. Far from repulsed, the princess appears rather interested in the possibility of this incestuous coupling (after all, she does love her father!). But her fairy godmother (a delightfully modern Delphine Seyrig) discourages her from accepting, more, we come to learn, because of her own jealousy‚ÄĒshe clearly has a thing for the king‚ÄĒthan out of a sense of propriety.

Remarkably, the film never actually diffuses the possibility of incest that it raises. Instead, Deneuve‚Äôs princess flees the kingdom, concealed beneath a magical donkey skin (a great disguise, apparently, and also, yuck). While slumming as a scullery maid, she manages to win the affections of Jacques Perrin‚Äôs handsome young prince, which resolves everything. Except it doesn‚Äôt. And that‚Äôs the point.

The glories of Donkey Skin lie in the ruptures between the irresolvable conflicts brought on by inappropriate desire and the raptures of costume and production design, lighting and camera placement, melody and voice. To see Deneuve decked out in gowns meant to evoke the weather, the moon, and the sun brings pure, unbridled pleasure; never mind that the dresses are commissioned in an elaborate scheme to delay an impossible marriage. The musical number in which the princess bakes the young prince a love cake, singing the recipe step by step, is such an unmitigated delight that I nearly forgot, as Deneuve massaged the dough, that I was living through a pandemic. This is the transcendence the genre offers in the hands of a master.

Then, when it all came flooding back to me, I was struck with a perverse notion of my own: what about a quarantine Donkey Skin baking challenge, with cinephiles coast to coast attempting their own version of the princess‚Äôs love cake? What do you say, Farihah; are you game? ‚ÄĒChris Wisniewski

I‚Äôm afraid I‚Äôm not much of a baker due to a preference for the salty/crunchy side of the taste spectrum and a persistent lack of ability (or is it desire?) to follow a recipe exactly. As much as I had hoped that quarantine might change this about me, it seems I only fuck with flour if it‚Äôs going into a batter or destined to be laboriously stuffed like a samosa or a dumpling. However if the city of New York is in need of a judge for this challenge, someone with the fortitude to receive platters and platters of love cakes from amateur cinephile bakers, safely, upon their Brooklyn stoops, you know I will step up and do my duty.

It‚Äôs true that musicals can be an escapist balm during troubled times, but during the particulars of necessary social distancing, they also intensify a longing for communal experience that includes touch. Two weekends in a row (one of them spent recovering from what was likely a mercifully mild bout of COVID), I have also instinctively turned to a musical for comfort and also, coincidentally, began with a classic (Stanley Donen and forever heartthrob Gene Kelly‚Äôs Singin‚Äô in the Rain) followed by a darker, yet equally frothy 1970s take on the genre: Thank God It‚Äôs Friday, the directorial debut of Robert Klane, who scripted both Weekend at Bernie‚Äôs and its sequel. These films now feel like tributes to the luxury of casual contact.

Thank God It‚Äôs Friday involves the kind of one-crazy-night set up that has always fascinated me; in the same way that the visual medium can be bent and manipulated to convincingly convey the pleasures of other senses‚ÄĒscent, taste, the aforementioned touch‚ÄĒI consider it an act of wizardry that with the right lensing and editing cinema can envelop you in a gathering. Unlike films with a similarly wide cast of characters and loping vignette structure that culminate in a party scene (Dazed and Confused, say, or Booksmart), Thank God It‚Äôs Friday never even leaves the club. For the record, that club is named Zoo.

This borderline plotless film is born in a DJ booth, lives on the dance floor and dies, elated, on the neon-washed parking lot pavement at Zoo, the kind of space where people specifically come together, consciously or otherwise, in order to become one heaving organism, to breathe together, sweat together, dance together, synced to the same rhythm; of course the film is saturated by physical contact. But do not all musicals, from Meet Me in St. Louis to the video for Bjork‚Äôs ‚ÄúIt‚Äôs Oh So Quiet,‚ÄĚ flirt with this sacred evocation, try to recreate the sense that anything can happen, that any externalization of an emotional state can take physical form, can bring the porous boundaries of the dance floor to moments of everyday life? Turn to your left and there is a dance partner, ready to take your hand and lift you up.

Speaking of nostalgia, I was also tickled by this Wikipedia entry on the concept embodied by the title of the film; by the subtle, equalizing shift in cultural perspective that highlights the strange and sometimes myopically privileged genesis of our idioms, but especially by the idea that Friday is not just a day of the week but a state of mind: ‚ÄúThank God It's Friday‚ÄĚ is a common expression in English-speaking Western countries. It expresses gratification that the working week is nearly over, and a weekend of leisure will soon be here.

So often in the past weeks I‚Äôve grimly joked to myself (I am my own quarantine bae), √† la Maggie Smith‚Äôs Dowager Countess of Grantham, ‚ÄúWhat is a weekend?‚ÄĚ As the days blur maddeningly together, the idea of ritual and celebration feels increasingly crucial in delineating the passage and bolstering the meaning of time, of which moments we feel allowed to give ourselves respite, to shore up those lucky enough to have such a thing, and to honor those who do not. Welcoming the weekend, whatever that is, with a Friday night musical feels like an appropriate tradition.

Regarding the cameo of one Ms. Donna Summer‚Ä¶like any great, intangible party peak, you had to be there (and still can, via the magic of streaming!), but I will say that the moment my bangs grow out and it becomes ethically reasonable to let another human near my face, I will be asking for her hair, iconic, Billie Holiday-esque tucked hibiscus flower and all. ‚ÄĒFarihah Zaman 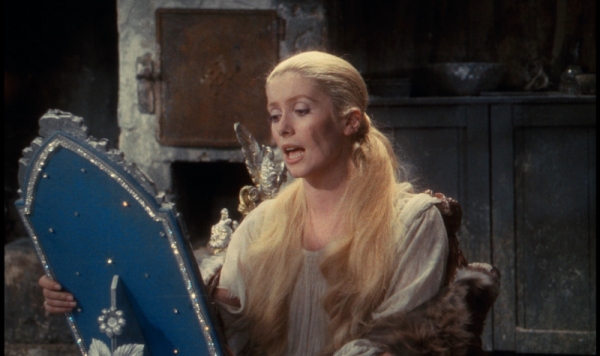