The Chronicle of Anna Magdalena Bach
Here‚Äôs a connection. The default question I am asked by fellow film lovers during the lockdown is: ‚ÄúWhat are you watching?‚ÄĚ My questioners have all manner of prepared answers to this: a film randomizer, iffy horror sequels, Cary Grant pictures. To my shame, I have none. Until a few days ago, the closest I got to watching a film in its entirety since the unpleasantness began was Chaplin‚Äôs The Gold Rush, aborted at the first sight of Georgia Hale because I wasn‚Äôt ready to suffer.

Why am I having so much trouble letting film back into my life at a time when it should be the greatest redeemer? Am I a bad cinephile? Perhaps the directness and objectivity of cinema‚ÄĒits ever-opening window onto the real world, so vital to me in peacetime‚ÄĒis too much now. Cinema carries a deep connection to the recent past (before the unpleasantness), which disconcerts. I need something to have changed: a more abstract, ethereal experience that will leave me alone with my own thoughts and not those of others. Music provides this in spades, with J S Bach foremost. The cantatas, masses, concertos, oratorios; the organ toccatas, motets . . . the Passions. Bach‚Äôs incorruptibility and rigor, producing something so infinitely sublime and personal from something so geometric, is what I crave.

There are plenty of ways back into cinema by this route. Bergman, for one. Or Malick. (So many recent releases dissolve in the mind now when compared to his A Hidden Life, and not just for his lacerating use of DvoŇô√°k and Handel). One film, though, imposes itself: Jean-Marie Straub and Dani√®le Huillet‚Äôs 1968 The Chronicle of Anna Magdalena Bach, which records not only the inalienable splendor of Bach throughout but also presents an awesome cinematic singularity. It is‚ÄĒas far as I can tell‚ÄĒthe only concert film ever made outside of the documentary format. For while each performance is recorded in a single take and unaltered, with numerous imprecisions and flaws left in, performers in period costume take the roles of Bach, his wife and his performers at Leipzig. Despite the efforts of many artists and historians, there is no actual ‚Äúchronicle of Anna Magdalena Bach,‚ÄĚ as almost none of her words survive. The diary entries that narrate the action are invented by Straub and Huillet, compiled from snippets of the contemporary here and there.

This film arrests and purifies by its refusal to add anything textural to the music itself: the camera is static, the actors expressionless. Narration by Anna Magdalena (Christiane Lang) describes the end of Bach‚Äôs life and lapse into financial hardship and blindness. Occasional meditative tableaux of nature‚ÄĒStraub‚Äôs response to Griffith‚Äôs complaint that modern films lack ‚Äúthe beauty of the wind in the trees‚ÄĚ‚ÄĒpunctuate the pieces, but the breath of life comes from the music itself. Beyond a desire to depict harmonic purity (to make a film ‚Äúof‚ÄĚ Bach‚Äôs music rather than ‚Äúabout‚ÄĚ it), a second preoccupation of Straub‚Äôs emerges: his philosophy of acting, applied to professional musicians recast as actors. (Straub was the more vocal and public of the two figures and concentrated primarily on direction and image, while Huillet co-wrote, managed the production design, and ruled the editing suite).

The Dutchman Gustav Leonhart was a harpsichordist of renown and a scholar, responsible for colossal strides in the use of period instruments in modern repertoire. He bore no physical resemblance to Bach but was cast for his interiority and prowess at the keyboard. During an early rehearsal of his performance of the ‚ÄúItalian Concerto in F Major,‚ÄĚ Straub interrupted a bewigged Leonhart mid-flow with one of the most baffling notes that can ever have been given to a lead actor in the history of motion pictures: ‚ÄúYou‚Äôre trying to be too naturalistic!‚ÄĚ Leonhart had sensibly imagined how Bach would have felt when performing his concerto for the first time, but Straub was having none of this. He wanted Leonhart to concentrate on his own performance of the piece. He needed to capture that fear, which could only ultimately come from the camera rolling and the knowledge that there was only one take. In that sense, The Chronicle of Anna Magdalena Bach is a documentary‚ÄĒabout performance‚ÄĒan extreme statement of the views of Renoir and Pialat, who believed all films were documentaries about the processes of their own making.

Victor Hugo observed: ‚ÄúMusic expresses that which cannot be put into words and that which cannot remain silent.‚ÄĚ This film reflects, passionately and even somewhat aggressively, Bach‚Äôs artistic force. Nothing verbal or aesthetic therein is expressed with the slightest emotion‚ÄĒeven the musical performances are resolutely straightforward‚ÄĒbecause everything is contained in the music and thereby in us. By connecting to nothing, this music connects everyone and everything. ‚ÄĒJulien Allen

Hi Julien! One thing I was most struck by in your essay, which is not to discount your characteristically articulate and concise accounting of The Chronicle of Anna Magdalena Bach, a film I treasure above the rest of its co-authors‚Äô forbidding corpus, is the idea of being a ‚Äúbad cinephile.‚ÄĚ Of all the things demanding reflection and/or action in a moment of constant, ambient stress‚ÄĒand, for many, a grueling but necessary form of compartmentalization between necessity and pleasure‚ÄĒworrying about maintaining some sort of high level of home viewership, whether privately or performatively (on Letterboxd, or Twitter, or wherever) seems absurd.

Except, of course, that it isn‚Äôt. As I happen to believe that we are who we are regardless of the surrounding context, and also that extreme situations of all kinds tend to deepen rather than diversify patterns of thought and behavior, it‚Äôs not surprising that I‚Äôve also been consumed of late by questions of what to watch, and why, and when. (As your kids are all considerably older and more self-sufficient than mine, I‚Äôm going to assume that ‚Äúwhen‚ÄĚ is a less pressing issue for you than it is for me, though I hope everybody is either sharing the family television or making do with laptops; for the twelve hours between Lea‚Äôs breakfast and bedtime, our living room set is either turned off or streaming Shaun the Sheep.) But where you describe being drawn to a work of extreme rigor‚ÄĒa film that commands and demands total attention, including and especially in musical sequences that are, as you say, eloquent despite their lack of language‚ÄĒI have found that, work assignments notwithstanding, I‚Äôve been drawn toward things that make me laugh‚ÄĒi.e. the same kind of casual, immediately rewarding late-evening viewing I favored before the imposition (here, there, and everywhere) of lockdown.

I mean, I could try to draw a tortuous analogy between The Chronicle of Anna Magdalena Bach, a hybridized biopic-slash-performance piece that doubles, as you describe, as a documentary of its actors, and the meticulous, methodical period and textural re-creations of Documentary Now‚Äôs season three episode ‚ÄúCo-op: Original Cast Recording,‚ÄĚ which spoofs D.A. Pennebaker‚Äôs 1970 v√©rit√© classic Original Cast Album: Company‚ÄĒitself a fly-on-the-wall observation of the recording of the soundtrack to Stephen Sondheim‚Äôs landmark Broadway musical. I could, but I won‚Äôt, because not even the psychic trauma of a global pandemic justifies that degree of kamikaze interpretive leap.

Instead, I‚Äôll pick up your final thread about music connecting everything and say that while luxuriating in the Documentary Now team‚Äôs typically expert and excellent formal and tonal parody‚ÄĒan affectionate yet straight-faced form of re-creation made even more amazing in this episode by the authentically Sondheim-ian songs penned by Eli Bolin, Seth Meyers, and John Mulaney (who also appears onscreen as a thinly veiled, sleekly turtle-necked version of the maestro)‚ÄĒI found myself moved by Ren√©e Elise Goldsberry‚Äôs rendition of the (intentionally) ridiculous song ‚ÄúMy Home Court,‚ÄĚ which begins with a series of strained tennis metaphors before transitioning into a hymn to tacky seventies interior design (‚Äúthe brown and the beige and the brown and the beige‚ÄĚ). Not moved by the song itself, which is, as mentioned earlier, utterly silly and eerily on-point as a satire of Sondheim‚Äôs slyly staccato rhyme schemes, but by the sheer exuberance of Goldsberry‚Äôs singing and performance, which exists at the same high level as her Tony Award‚Äďwinning work in Hamilton. Her brilliance contradicts the short‚Äôs narrative conceit that the apartment-themed musical ‚ÄúCo-op‚ÄĚ is a helpless, abject flop while consolidating its larger point: that musical theater has a uniquely spacious capacity for joy and delight.

Because Tanya has not seen Original Cast Album: Company, we quickly switched over to YouTube to watch Dean Jones‚Äôs glorious performance of the musical‚Äôs climactic ‚ÄúBeing Alive,‚ÄĚ which was excerpted in James Lapine‚Äôs 2013 documentary Six by Sondheim and revived last year as a conversation piece by Adam Driver‚Äôs rendition at the end of Noah Baumbach‚Äôs Marriage Story. No matter who‚Äôs singing it, what ‚ÄúBeing Alive‚ÄĚ interrogates‚ÄĒ via the same precisely sequenced, essayistic approach as Company‚Äôs other standouts, ‚ÄúYou Could Drive a Person Crazy‚ÄĚ and ‚ÄúThe Ladies Who Lunch‚ÄĚ‚ÄĒis the double-edged nature of isolation: the thin line between the freedom endemic to independence and the creeping, existential terror of lacking a companion: ‚Äúsomeone to sit in your chair, to ruin your sleep.‚ÄĚ The equation of monogamy as a form of cozy claustrophobia is a musical-comedy staple (kidded grimly at the end of Bob Fosse‚Äôs version of Pippin, whose protagonist concedes to being ‚Äútrapped...but happy‚ÄĚ at the end of his trials) and by no means the universal truth it‚Äôs grasping to be. But on the night that we were watching it, Jones‚Äôs closed-eye belting of the title phrase hit me like a proverbial ton of bricks, shocking me into sober awareness and humbled gratitude for the things that I have. ‚ÄĒAdam Nayman 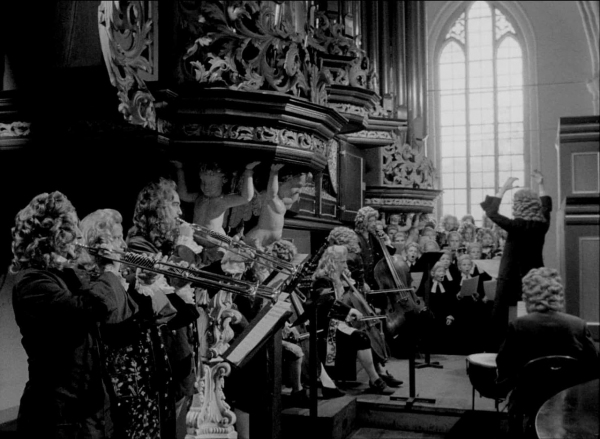