The India Kaleidoscope Film Festival runs from November 9–12, 2017 at Museum of the Moving Image.

In 1967, at the peak of postcolonial India’s Parallel Cinema wave, its poster auteur Satyajit Ray lamented in an op-ed in Film World: “Too much of our arts have been devitalized and shorn of their roots by aping the West. I hope the cinema, at least, retains its purity.” Ironically, the criticism leveled most frequently at Ray in domestic circles was that he pandered to Western sensibilities. His European-inspired neorealism and scorn for the broad, pan-Indian address of the commercial Bombay film (which he described in the same article as the “perfect formula to entice and amuse the illiterate multitudes”) were often perceived as signs of elitism, catered to the audiences of the foreign festivals where Ray and his contemporaries won acclaim than to the marginalized Indians who formed the subjects of their films. It’s an accusation that independent filmmakers in India still contend with, caught in an unfortunate double-bind where local, social-realist cinema is often sustained by international funding and distribution.

In recent years, however, the proliferation of domestic film festivals and the support of the National Film Development Corporation of India have facilitated an increasing number of local, out-of-mainstream spaces for film production and viewership—enabling the rise of regional independent movements like the Marathi and Malayali New Waves. The India Kaleidoscope Film Festival, now in its second year at the Museum of the Moving Image, captures this emergent moment in Indian film culture: its slim but diverse line-up culls, from all over the country, independent films that render stories of the mofussil with a distinctly regional idiom.

Nila Madhab Panda, whose deliberative and devastating Kadvi Hawa (Dark Wind, pictured above) opens the festival, is known for films sometimes described as “issue-based”: he debuted in 2006 with a documentary short, Climate’s First Orphans, about the devastation wreaked in coastal Odisha by rising sea levels; his feature Jalpari (2012) wove an excoriating critique of female foeticide into a children’s adventure film; and with Kaun Kitne Paani Mein Hai (2015) he satirized the social consequences of the water shortage crisis in rural India. Kadvi Hawa begins by taking on another hot-button issue—the “contagious disease,” as one character in the film puts it, of suicides in the country’s famine-stricken regions—but the film reveals itself, with rich and slow-burning pathos, to be much more expansive in scope.

Set in Mahua, a parched district in Central India, Kadvi Hawa centers on Hedu (Sanjay Mishra), a blind old man who fears that his depressed son might soon succumb to the fate that has claimed several other young farmers in the area. Desperate to protect his family, he strikes up a clandestine deal with a man known in the village as the “God of Death”: the ruthless loan recovery agent Gunu Babu (Ranvir Shorey), infamous for the trail of suicides he leaves in his wake. Impatient and merciless, concerned only with the “double commission” he gets for recovering loans from debt-ridden regions, Gunu seems, at first glance, like the very embodiment of an indifferent bureaucracy. However, a narrative masterstroke soon reveals Gunu and Hedu as victims of the same forces. While Mahua is ravaged by drought, Gunu Babu’s impoverished hometown in coastal Odisha—where his wife and child live precariously in a thatched hut—is wrecked by torrential rains and cyclones that whisk entire villages into the sea. Panda deftly switches the scale of the film from local to global, articulating, with a modest humanism, the insidious magnitude of climate change. The heartbreaking irony is that Hedu and Gunu are caught up in a crisis in which they play no part; they lack even the basic amenities one would require to produce a carbon footprint. When tragedy strikes towards the end of the film, Panda leaves them both suspended in limbo: waiting for the arrival of a bus, waiting for news of loved ones, waiting to be hit by the brunt of a catastrophe of someone else’s making. 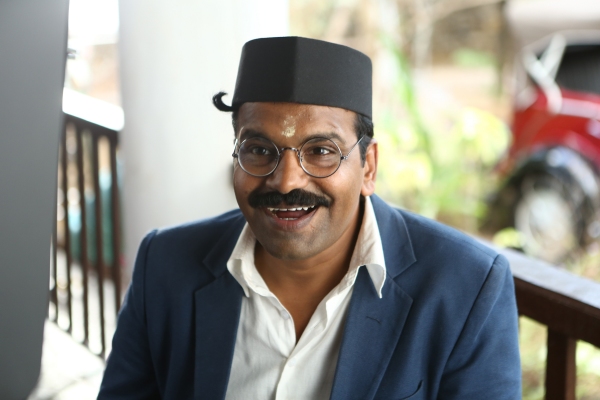 The Closing Night selection, Prakash Kunte’s Cycle, leavens the pessimism of the festival’s opener—almost as a counterpoint to the parched vistas of Kadvi Hawa, it offers the lush, tropical greens and blues of the western Konkan coast. In this fable-like Marathi-language feature set in the late 1950s (a throwaway reference to Nehru’s Dowry Prohibition Act is the only temporal marker), the trajectory of a stolen bicycle becomes a metaphor for the cyclical nature of good karma. Keshav, played by a wonderfully folksy Hrishikesh Joshi, is an astrologer widely beloved in his village for his compassion and generosity. His one prized possession is a vintage bicycle that was gifted to his grandfather by a British officer. When a pair of thieves steal the bicycle, Keshav falls into a deep dejection; meanwhile, as the thieves make their way through the countryside, they encounter warm receptions and random acts of kindness from strangers who recognize Keshav’s bicycle and remember him for having touched their lives.

The thieves embark on a predictable journey of redemption, but the portrait it paints of idyllic country life, with quirky characters and an indefatigable sense of community, offers a welcome alternative to indie cinema’s predominating depictions of the rural as a site of poverty and oppression. Keshav, on the other hand, undergoes a more surprising arc; as he grapples with the loss of his bicycle, the film considers philosophical questions of free will and material attachment with a profound, yet playful touch. Something of the fantastical seeps into the narrative, too, as coincidences (or is it the magical power of goodness?) nudge the characters toward their intertwined destinies. Perhaps it is Keshav’s ability to predict the future that imbues the film with a hint of the uncanny; or perhaps it is the ethereal beauty of the Konkan countryside, shot in glowing, Pixar-like saturated colors, which elevates the film into the realm of fairy tale. 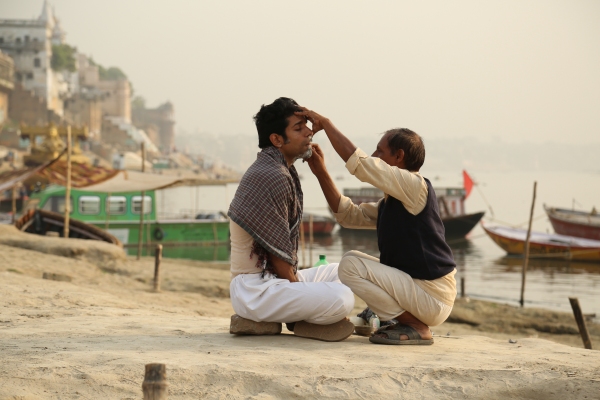 One of the most exciting screenings at the festival is the U.S. premiere of Mukkabaaz (The Brawler), Anurag Kashyap’s highly anticipated new film about an aspiring boxer in small-town Uttar Pradesh. Mukkabaaz is probably the festival title that hews the closest to the Bollywood formula, with an ambitious romantic-action-drama concoction anchored by fairly recognizable stars. However, Kashyap—who rose to prominence in 2012 with the stylish guns-and-gore saga Gangs of Wasseypur—is a pastiche artist par excellence. The film’s opening sequence, consisting of dynamic, blood-soaked long takes, tips an ironic hat to both Bollywood masala movies and the likes of Scorsese and Tarantino. Protagonist Shravan (Vineet Kumar Singh) arrives at the house of his district coach Bhagwan Das, a Hindu supremacist thug-lord whose imperious voice indicates his offscreen presence. In minutes, Shravan falls in love at first sight with the coach’s gorgeous, mute niece Sunaina (Zoya Hussain); picks a fight with a fuming Bhagwan Das, played by a cataract-eyed Jimmy Shergill, who rises, dragon-like, into frame; and gets beaten almost to death by Bhagwan’s cronies while Sunaina watches from a rooftop in half-consternation, half-awe. The rest of the film hurtles from one violent confrontation to the next as Shravan attempts to marry Sunaina and pursue his boxing career in open defiance of the corrupt, all-controlling Bhagwan Das. At one point, a sympathetic mentor tells Shravan that he must choose what he wants to be: a mukkabaaz or a mukkebaaz (a brawler or a boxer). As the film’s title suggests, Kashyap never intends for Shravan to have a choice: this is a Wasseypur-style drama of blood, bullets, and revenge, disguised thinly as a sports film. 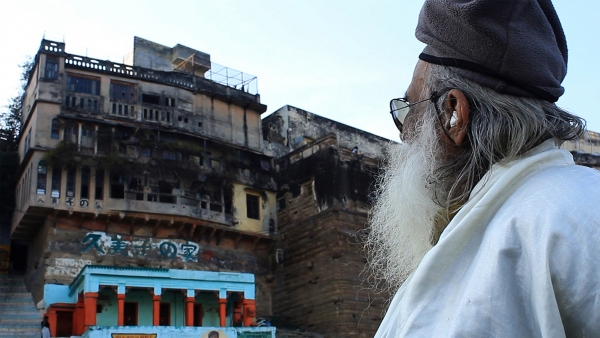 Also set in Uttar Pradesh is Last Days, Last Shot, Sumira Roy’s gentle, probing documentary about the inner lives of two men in Varanasi, the City of Death. Born into the Dom caste, young photographer Vikram is considered both an untouchable and a keeper of the sacred flames of the city’s cremation ghats, to which hundreds pilgrimage every day so that their loved ones may be cremated next to the holy Ganga. Vikram’s ancestors were the “Kings of the Ghats,” he says proudly—their pyres were, and still are, believed to liberate one’s soul from the everlasting cycle of life and death. Vikram continues the business of his forebears, in a sense—in an extraordinary reification of Roland Barthes’s assertion that the photographic image both “produces Death and preserves Life,” Vikram earns his livelihood by taking pictures of corpses for the purposes of life insurance documentation.

Roy’s other subject, Dada, is a once-famous Bengali artist and poet who now runs a small hotel in Varanasi along with his Japanese wife, Kumiko. The eccentric old man’s penchant for artistic abstraction and impromptu verse (“I have a busy life, but my bag of happiness is empty,” he waxes, gliding on the Ganga in a canoe) functions as a foil to Vikram’s prosaic, practical approach to his craft. Vikram peddles his pictures on the streets like a vendor might sell tchotchkes to tourists: “Photo!” Photo!” he yells at the death processions that pass by on their way to the river and haggles with the recently bereaved over the prices of his pictures. As Roy alternates between vignettes of the two men, Last Days, Last Shot becomes a fascinating case study of the ways in which the ubiquity of death shapes the lives of those who occupy different rungs of Varanasi’s social ladder. In some, such as Dada, it inspires a predilection for poetry and aspirations of nirvana; for men like Vikram, death is yet another industry where they must hustle in order to eke out a living.