As we move into an unprecedented time, here at Reverse Shot we aim to continue writing about and connecting through film, even in what will likely need to be a limited capacity. In this new weekly column, Connected, one writer will send another a new piece of writing about a film they have been watching and pondering over, in the hopes that this will prompt a connection‚Äîemotional, thematic, historical, or analytical‚Äîto a different film the other has been watching or is inspired to rewatch. This ongoing column will be in the spirit of many past Reverse Shot symposiums, in which writers found connections between seemingly disparate cinematic works, and it will also help us maintain personal connection among our writers and our readers at this uncertain moment.

The materials of The Owl‚Äôs Legacy are simple even if the cumulative effect of their arrangement is unfathomably profound. For this 1989 series for television, Chris Marker curated and filmed four symposia in the Grecian sense of the word: lush banquets followed by wine and energetic discussion, occasionally a little bit of music. Assembled at this quartet of tables‚Äîlocated in Berkeley, Tbilisi, Paris, and, of course, Athens‚Äîis a coterie of experts who discourse passionately and at length on different facets of Ancient Greek culture. Interspersed with these groupings are interviews with single subjects who echo, amplify, and occasionally contradict and complicate the discussions found in the symposia as well as provide occasional deep dives into more personal terrain sparked by the main theme. Owls (computer-rendered, sculpted, and painted) placed within these often abstracted frames look on; filmmakers Theo Angelopoulos and Elia Kazan make appearances in these spaces, as does the composer Iannis Xenakis. Each 27-minute episode is structured around and titled after a word derived from the Greek and appended with a cheekily Marker-esque subtitle: ‚ÄúSYMPOSIUM or Accepted Ideas,‚Äù ‚ÄúDEMOCRACY or The City of Dreams,‚Äù ‚ÄúMYTHOLOGY or Lies Like Truth,‚Äù ‚ÄúMISOGYNY or the Snares of Desire.‚Äù Since this all comes to us from the febrile imagination of Chris Marker, much conventional wisdom is overturned, there are detours to Tokyo and Cape Verde, trips to various antiquities museums and landmarks, dissections of 20th-century archival imagery, a brush against Vertigo, and at least a handful of cats. Imagine the globe-spanning, time-hopping Sans soleil, but with a more openly pedagogical bent.

For nearly seven hours spanning 13 episodes, The Owl‚Äôs Legacy is, miraculously, just ‚Ä¶ talking: intelligent people, sharing ideas in conversation with a group or with the work‚Äôs creator, their thoughts placed in additive or combative juxtaposition with those speakers who have preceded or followed them. As you watch, heroes emerge: will you fall hard, as I did, for bald, bespectacled philosopher polymath Cornelius Castoriadis, whose every appearance, filled with passion and deft ability to formulate grand holistic connections across disciplines represented a gymnastic, jaw-dropping display of erudition? (I missed him when he disappeared from episodes four through nine.) Or will you grok the wry wonderings of poet-musician Angelique Ionatos, whose ruminations ferret their way along idiosyncratic paths to profundity? The gravelly intensity of recently passed literary critic George Steiner may grate initially, but watch how he wraps himself around connections between the ancient Greeks and modern Germans (especially the Nazis), who self-styled themselves as heirs to classical thought: first dismissing the absurdity of this claim on its face before interjecting a crucial ‚Äúand yet,‚Äù opening the space to acknowledge he finds echoes of this lost world in the works of Rilke. There‚Äôs something soothing‚Äîeven moving‚Äîin this contemporary group wrestling with these millennia-old ideas. The sense that some things of value can, and do, endure.

Each cut brings a new face to the screen bearing a new idea. The series plays fast; the subject matter is heady, but the conversations captivate. Though there is no forward-rushing narrative, Marker (who credits himself here only as ‚ÄúSkipper‚Äù) constructs cliffhangers so that each episode builds toward a question addressed by the next. Binge away! It is, admittedly, an overly masculine collection of speakers, and Marker‚Äôs unfortunate decision to fill the tables of his symposia with young, beautiful women asked to look upon the conversation quietly (a failed attempt to visualize the idea of a muse?) and credited only as ‚Äúguest stars‚Äù suggests some unfortunate retrograde thinking. Yet, throughout, watch for Marker‚Äôs not-so-subtle favoring of moments of ambiguity and complexity in the ancient world (Pythagorean abstraction, the boundless pantheon of Greek deities, the ancients‚Äô more rough-and-tumble conception and execution of democracy) as a way to suggest that the ascendance of monotheistic Christianity produced a flattening effect on culture, debate, and the human psyche from which mankind is still reeling and may, conceivably in this moment, not recover.

You will be a smarter person for having spent time with The Owl‚Äôs Legacy. (For many, this would be understandable criterion for avoiding a piece of art entirely‚Ä¶) I‚Äôll leave things off with a quote from Jean-Michel Frodon, whose very fine words on this very fine work of cinema grace the liner notes of the DVD edition: ‚ÄúThe heart of its subject was and still is today, the world, the contemporary world in all its complexity, its violence, its dynamics.‚Äù ‚ÄîJeff Reichert

Your phrase ‚Äúa brush against Vertigo‚Äù could basically apply to my entire life. For Marker, Hitchcock‚Äôs movie has been a lifelong hobgoblin, its imprint mischievously turning up time and again throughout his filmography; presumably this most vaporous of urtexts also turned up often in his dreams. Vertigo‚Äôs ability to infest the psyche is not an academic, metaphorical, or theoretical notion for me‚ÄîI literally have had dreams about it. One of these came when I was very young; I distinctly remember the horror and paralysis I felt one dark night when I dreamt that the painting of Carlotta Valdes that seemed to consume Madeleine Elster was somehow attacking me. It‚Äôs not that the painting came to life or was animate, but the power of the image itself‚Äîof Carlotta with her bouquet, her spiral hair curl, her glistening necklace against bare pale skin and pale purple gown, her direct-to-camera stare of impenetrable judgment‚Äîbore down on me from its perch on the museum wall. The painting of Carlotta, with her sly, knowing glance, is the visualization of all of Vertigo‚Äôs irreconcilabilities: it‚Äôs a ghost story without a ghost, and she‚Äôs in on the scheme. Carlotta‚Äôs appearance in my nightmare was so terrifying that I woke up mid-silent scream, sucking in air and unable to breathe.

I was reminded of the dream this past week when I watched The Green Fog for the first time, the hour-long 2017 film by Guy Maddin, Evan Johnson, and Galen Johnson that was just made available to stream for free on Vimeo. Stitched together almost entirely of footage from films shot in San Francisco in order to create a more or less linear variation on the narrative of Vertigo, this captivating experiment gets to the heart of just how much Hitchcock‚Äôs film has haunted cinema. Feeling in some ways like a miniature incarnation of Christian Marclay‚Äôs The Clock‚Äîat 1/24th of that film‚Äôs length, of course‚ÄîThe Green Fog cannibalizes short, terse clips from other films to create an approximation of Hitchcock's film. It‚Äôs a clever way of thinking about movie remakes that is also a kind of ultimate tribute to another artist‚Äôs work, harnessing the borderline jokey nostalgia that informs all of Maddin‚Äôs films for an entirely new thing, which the filmmaker called ‚Äúa Frankenstein‚Äôs version‚Äù of Vertigo.

While our ability to make sense of The Green Fog is tied to our foreknowledge of Vertigo‚Äôs imagery, characters, and narrative, it also is a work of intentional estrangement. A catalog of scenes taken from other films, The Green Fog is an archival project that creates a cause-and-effect narrative, and as such it foregrounds that we can never entirely trust what we see in a film, that shot-reverse-shot constructions or other forms of traditional cutting are always just pretenses to reality. Maddin and the Johnsons use a bounty of clips, from American thrillers made before Vertigo and which were possible influences (Dark Passage, The Lady from Shanghai) to those made after Vertigo and which were likely inspired by it (cheapjack eighties and nineties thrillers like Jade, Jagged Edge, and Pacific Heights) to titles that have ridiculously little in common with Vertigo but whose images of the City by the Bay are easily pilfered for absurdist inclusion (Flower Drum Song, The Love Bug, Sister Act). Furthermore, the filmmakers manipulate and cut around particular sequences in ways that denude them of context and dialogue, instead enhancing their sense of being a part of some greater cinematic intertextual master narrative. For example, a chopped-up clip from a restaurant scene in the series The Streets of San Francisco maintains conversational back-and-forth glances between Fritz Weaver and costar, but trims out all the dialogue, leaving just stares and grimaces, stutters and starts, making the two men seem like quiet, knowing conspirators of some unknown plot.

The plot, of course, is that of a film made many years earlier, a film that artists like Maddin and Marker know by heart, and which cinema itself remains indebted to. A welcome perversion that has contaminated decades of Hollywood filmmaking, Vertigo is like a sacred text that has been passed down through generations, perhaps not unlike how Marker‚Äôs scholars in The Owl‚Äôs Legacy see tenets and ideas of ancient Greece in contemporary thought and behavior. Vertigo‚Äôs traces remain legible in so much of how we read movies, how we deal with filmic identification and estrangement, in how we view movie obsession as a kind of romance with death, a necrophilic fantasy. Vertigo will always be my dream and my nightmare, peeking out from the edges of every other movie frame. ‚ÄîMichael Koresky 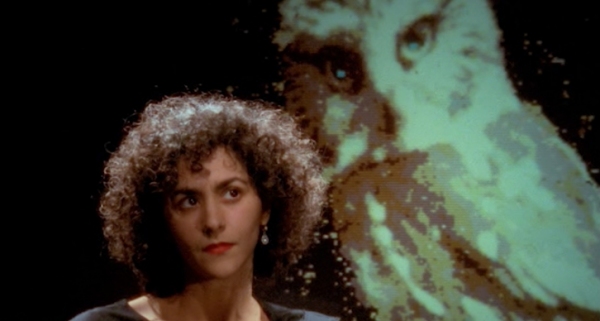