Fires Within
Matt Connolly on Humphrey Jennings and Derek Jarman

Poets of Pandaemonium: The Cinema of Derek Jarman and Humphrey Jennings plays February 8 – 17, 2019 at Museum of the Moving Image.

At first blush, coupling the films of Humphrey Jennings and Derek Jarman can feel a bit like spray-painting an obscenity over a “Keep Calm and Carry On” poster. The tonal, visual, and thematic contrasts between these two masters of British filmmaking all seem to converge around their seemingly diametric views of mother England—a sober bulwark of civilization for Jennings; a largely hollowed-out husk for Jarman. The creators of “Poets of Pandaemonium: The Cinema of Derek Jarman and Humphrey Jennings” more or less acknowledge their odd-coupling, with curator Max Carpenter noting the “speculative” nature of the series’ Jennings-Jarman double features. Few will walk out any of the series’ screenings mistaking the two men for long-lost cinematic soulmates. Indeed, it is this very acknowledgment that allows the series to both consider the filmmakers’ obvious divergences in new ways and explore subtler degrees of overlap between their work.

Both filmmakers adopted radically different stances toward their home country born out of both historical context and individual circumstance. After a peripatetic journey through academia, photography, and painting, Jennings came to film in 1934 after taking a job at the GPO Film Unit, a division of the UK General Post Office that eventually became a propaganda arm of the British Ministry of Information during World War II. Work within the unit (renamed the Crown Film Unit in 1940) necessarily adhered to the ideological contours of the government, yet one rarely feels Jennings chafing against this constraint. His documentary portraits of wartime England envision the era’s strife as both a test and confirmation of a sturdy and enduring national character. Little such patriotic optimism finds its way into the work of Jarman. Born in 1942 during the very national strife chronicled by Jennings, Jarman saw his work as a series of pointed provocations against England’s past and present. Most notably, this meant an injection of queer deviance and desire into dominant historical narrative, beginning with his 1976 debut feature, Sebastiane. This project became all the more urgent as the 1980s progressed, with the HIV/AIDS epidemic killing thousands of gay men including Jarman himself in 1994. In this respect, Jarman can be seen as much a wartime filmmaker as Jennings.

Ironically, it is one of the series’ most starkly opposing double bills that quietly complicates this dichotomous understanding of national character. It begins with Fires Were Started (1943), a docudrama centered on British firefighters battling blazes during the Blitz that stands as Jennings’s sole feature-length film and embodies much of his cinematic worldview. Much of the film’s first half consists of the men (real-life firefighters essentially playing themselves) going about their daily routines, which includes a robust helping of jocular banter and gather-round-the-piano bursts of song. As in much of Jennings’s work, these slices of everyday life are shadowed by the ominous threat of wartime chaos even as their casual rhythm and wry humor constitute an implicit rebuke of England’s enemies to fundamentally disrupt the country’s way of life. Still, the amorphous dread that underlies daily experience gains a particularly potent visual character here. An increasingly out-of-control warehouse fire consumes the film’s second half, with lengthy sequences of the firefighters attempting and failing to curtail the blaze as it threatens to spread to a nearby munitions ship. Jennings unfailingly finds moments of no-nonsense grit within this calamity. (In a scene that borders on self-parody, a telephone operator is thrown to the ground by an explosion, only to return to her post moments later and begs her interlocutor to pardon the interruption.) Yet the concluding note of stiff-upper-lip inspiration cannot fully dispel the unceasing images of wild flame and choking smoke that dominates Fires Were Started for almost 30 minutes. The title itself speaks to this duality, as much an acknowledgement of omnipresent threat as it is a paean to the patriotic flame within.

Fires Were Started gets paired with Jarman’s Jubilee (1977), which might be understood as a vision of England in which the blazes of World War II simply burned on, consuming both the nation’s physical infrastructure and social fabric. The film imagines contemporary England in post-apocalyptic terms—crumbling buildings, fascistic police, and a marauding gang that double as our would-be heroes. On paper, Jarman’s polysexual protagonists prove a roughhewn antidote to the decay of postwar British life. The film underscored its ties to the ’70s punk scene by casting musicians like Toyah and Adam Ant and foregrounding its aesthetic through the character’s eye-searing hair colors and leather-dominated attire. Just as one senses the chill of dread running beneath the surface of Jennings’s sober optimism, Jarman’s viewers hardly feel comforted by the film’s punks-will-inherit-the-earth narrative. An aggressive and violent work in both style and story, Jubilee alternately delights in its characters’ outré provocations and unblinkingly chronicles their acts of nihilistic cruelty. Anarchic queerness does not save a rotting Britain so much as just burrow into its carcass, overturning old pieties while remaining susceptible to the larger societal infection. No choice underscores the charged ambivalence at the heart of the film more than Jarman’s decision to frame Jubilee as the time-traveling exploit of Queen Elizabeth I, who sojourns some 400 years to observe the future state of her kingdom. She becomes a kind of audience surrogate, observing the wreckage with benumbed curiosity. No one would mistake this choice for crypto-conservatism, but it speaks to Jarman’s conflicted critical engagement with his own country’s legacy that transcends easy utopianism.

Indeed, these complex oscillations within each director’s view of England—Jennings’s optimism and unease; Jarman’s heritage and heresy—can be mapped onto a telling stylistic overlap between the two filmmakers. Both consistently returned to the relationship between sound and image throughout their careers as an ever-fruitful source of aesthetic challenge and inspiration. Explicit forays into sonic and visual juxtaposition constitute some of the most acclaimed work of their respective careers. The opening night double bill highlights this well, with Jennings’s Listen to Britain (1942), an aural-intense panorama of wartime life codirected with Stewart McAllister; and Blue (1993), where Jarman reduces the visual field to a single shade of the titular color and pairs it with an autobiographic array of voices, effects, and musical cues.

A coupling of lesser-known titles, however, offers a similarly rich mixture of sound and image that also grapples with notions of national legacy. Words for Battle (1941) constitutes yet another of Jennings’s meditation on the state of the war-buffeted British spirit, but it does so through the foregrounding of the nation’s literary tradition. Milton, Blake, Browning, Kipling—snatches from all of their work are alternately laid over moments of pastoral calm or post-bombing debris. Word and image frequently reinforce one another in hopeful fashion, even as the overlaying of Kipling’s “The Beginnings” (with its ominous records of “when the English began to hate”) onto bombed-out buildings eludes to the darker emotions underscoring the country’s wartime spirit. Beyond taking inspiration from these canonical texts, however, Jennings expands the canon of linguistic inspiration to include both Winston Churchill and Abraham Lincoln. Such a move suggests a simultaneous respect for and engagement with English cultural inheritance at a moment of profound strife. Jarman’s The Angelic Conversation (1985) similarly recontextualizes the literary heritage of England, albeit through the lens of erotic expression over patriotic ardor. Following a pair of men through a series of physical wanderings and inchoate desires, the film pairs these images with various Shakespearean sonnets. Jarman remains uninterested in easy uptake or feel-good identity politics. He distances the viewer as much as ever, filming his unnamed protagonists in stuttering super 8mm images and committing long stretches of the film to enigmatic imagery. Yet the need to link queer longing to these most iconic of English poems gives The Angelic Conversation an ideological force that is both emotionally and intellectually satisfying. And while Jarman may not have had a world war as backdrop, the ever-worsening plague of HIV/AIDS on (amongst others) the nation’s gay men gives this project a piquant political urgency.

What Jennings and Jarman ultimately sought to valorize or expose about their country remains distinct, separated by time, identity, and ideology. How they chose to use the cinematic medium offers similar cleavages of aesthetic instinct and production circumstances. Despite all differences, though, a spirit of restless investigation ultimately connects these pairings—of national history, of formal limits, and the ways that the exploration of one entails the expansion of the other. That Jennings and Jarman are additionally linked by their untimely deaths at ages 43 and 52, respectively, adds a final, poignant wrinkle to the series. These titans of British cinema never had the chance to speak to one another, and yet this unlikely pairing sparks some lively conversation. 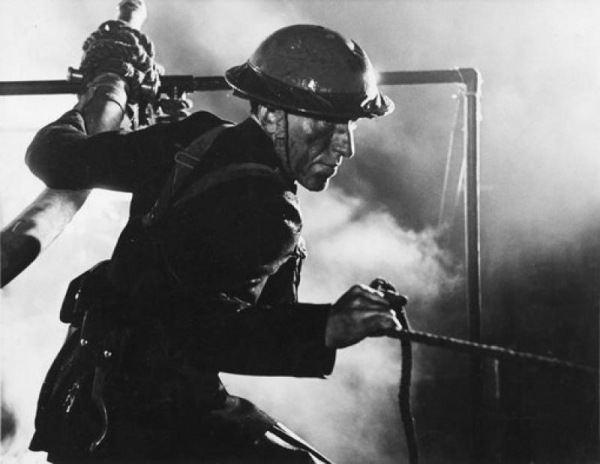