It is a half-truth, yet to be universally acknowledged, that no matter how revered a filmmaker is, should he or she have the temerity to change course later in life and produce a film about a breakdown of a marriage, then a) it will be an illuminating, game-changing treasure, and b) a good number of hitherto loyal fans, including many from the critical fraternity, will hate it. As this came to pass for Woody Allen (Husbands and Wives), Stanley Kubrick (Eyes Wide Shut), and Terrence Malick (To the Wonder), so it did in 1954 for the father of Italian neorealism, Roberto Rossellini.

Journey to Italy was mildly infamous on its release, not for any impact on its audience (coming out on the same day as Fellini’s La strada, it sank without a trace in Italy and was barely released in the U.S.), but for the vestiges of a drawn-out controversy over the adulterous affair between Rossellini and his star, Ingrid Bergman, as well as for rumors of the director’s perverse approach to dealing with his actors on set. Rossellini claimed that his celebrated preference for nonprofessional actors grew out of his impatience with—and distrust of—the process of cajoling and persuading real performers to do as they were told. Rossellini first cast Bergman in Stromboli in 1950, and their collaboration marked the beginning of a development of Rossellini’s own approach to realism, away from the journalistic depiction of history and towards the dramatization of human relationships—an advancement of which Journey to Italy was, in hindsight, the apotheosis.

Few spoke out in defense of Journey to Italy at the time, but one who did—Jacques Rivette, writing in Cahiers du cinéma in 1955—was both passionate and almost immeasurably influential. Rivette saw the film as incubating a new modernity in film: “a cinema that ‘shows’ instead of demonstrating; heroes who ‘behave’ instead of persuading.” In other words, here was, for the first time, human subjectivity taking center stage, the filming of bodies in their natural state and a refusal to prioritize or hasten the arrival of a logical purpose to every scene, beyond the natural processes of the characters’ lives. This canonization of subjectivity was to become one of the foundation stones for the Nouvelle Vague, to be launched on the world by Rivette and his friends just a few years later.

For those discovering Journey to Italy today for the first time on the big screen, it may carry a sense of familiarity common to many touchstone works of cinema: its languid, apparently directionless plot, following the tribulations of a couple who have loved, but whose lives seem overtaken by the preoccupations that get in the way of love, brings to mind the documentary of emotion of Husbands and Wives and the recent closure of a long-running love affair in Richard Linklater’s Before Midnight, which explicitly alludes to Journey to Italy and shares a similar narrative structure. What might strike lovers of Rossellini’s earlier, post–World War II pictures, is the aesthetic clarity of the film's principle confrontation: not that of the central married couple, for whom confrontation, like most potentially constructive means of communication, is something to be awkwardly avoided, but that between human “reality” (in this case the inescapable vagaries and pitfalls of married life) and the reality of the “outside world,” which is depicted using a technique since cheapened by television travelogue—images of Neapolitan life filmed from the window of a moving car.

Inside this car is an upper-middle-class English couple: he, Alexander Joyce, played by a gauche, halting George Sanders, worlds away from Jack Favell and Addison DeWitt; she, Katherine Joyce (Bergman), luminously lit, but stripped—by the rawness of the scenario—of Hollywood's protective filter. They are bound for Naples, the capo di tutti capi of jet-set holiday destinations, but most certainly not for pleasure, rather to deal with an inheritance as quickly as possible before returning home.

The images of Italy outside the car might have constituted green screen stock from any other director, but have an unmistakeable resonance coming from Rossellini and are thematically essential. The opening reportage shot of the road is almost clumsily inauspicious (particularly when set against the more conventional studio lighting of the couple inside the car) but as the couple’s growing appreciation of this outside world begins to encroach upon their lives, this lovingly produced footage—of life buzzing around them, of traders and pregnant mothers in the street—starts to exude an emotional power to match its unaltered beauty.

What transpires is a journey by each of the protagonists (they separate, and she visits museums and historic sites, while he goes to Capri to socialize) towards a spiritually influenced denouement which feels conclusive—because it occurs at the end of the film—but which cannot realistically be so, because the film never subscribes to traditional cinematic logic. Journey to Italy, as its title implies, relates a distinct episode in the life of this couple, with its own internal structure (as Rivette put it: “quest, expectancy, revelation”), but the film’s entire outlook is predicated on capturing the subjective, not manipulating its characters with the puppet-strings of conventional plotting. Their lives will continue and we can decide for ourselves as the lights come up how we think things will play out. 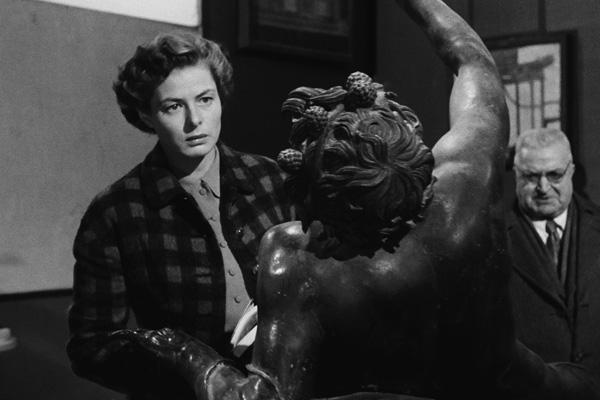 Off-screen, Rossellini was more manipulative, and went out of his way to make life as uncomfortable as possible for his actors. Sanders was told to sleep and dine in a different hotel from the rest of the cast, who were forbidden to visit him; not only was there no script on the first day of shooting, but there was never a script—to Sanders’s increasing exasperation, Rossellini would write lines of dialogue on shirt cuffs seconds before rolling; the actors were made to improvise and on occasion were given next to no direction; witnesses recall Bergman unsure of where to walk, what to say, and whether Rossellini was even paying attention (a standout scene on the terrace when Sanders is seeking wine, was reportedly shot with the director half asleep in a deckchair).

We can only guess the extent to which such experimental methods were responsible for the performances. Conventional critical wisdom would have it that Sanders is bad in Journey to Italy, but this may be because he is playing dull, which George Sanders should probably never do. In addition, his character is internalized and we are left to guess his sensibilities by his actions alone. As for Bergman, it is hard to imagine someone who sounds less like an Englishwoman being better cast as one, with her archetypal northern European beauty, buttoned up and in a state of almost perpetual discomfiture. Hers is a deeply affecting portrayal of an intelligent woman’s vulnerability, as she seeks emancipation from marital constraints by immersing herself in art and history. She is incandescent, at times puzzlingly so. In her appearance in the terrace scene, stretched out in the sun, wistfully remembering a poet she had loved from before she was married, and in a sequence in bed as she awaits her husband’s return from Capri, she is lit like Hedy Lamarr in Ecstasy. Besides his transparent adoration of her, what can Rossellini have meant by this, other than her character’s elevation to a state of grace? Katherine’s impulses are the catalyst for the couple's future and Rossellini's embracing of Bergman's own iconography (when set against her hyperreal persona) implies a fundamental romanticism in her character, which is vital to their reconciliation.

Snatches of shattering dialogue from others (as when a prostitute in Capri tells Sanders: “A friend died today. A lady friend. 32 years old. In a nightclub. She put her head on the table. And she died”) compete with the commonplace, uneven chatter of the couple in distress. Of course, when married people who don’t communicate try to talk, what they say is often crummy—Bergman’s inadequate “life is too short” line at a climactic moment betrays a volume of meaningful things deliberately left unsaid.

A late sequence on Vesuvius itself, where the smoke from Bergman’s cigarette causes the mountain to emit gusts of smoke of its own recalls not only Stromboli’s volcanic climax but also strongly calls to mind, in its correlation of nature and humanity, the Mont-St Michel mud sequence in Malick’s To the Wonder, and begins to emphasise how the protagonists’ connection to everything around them will ultimately draw them closer, for protection. Perhaps the most limpid example of Rossellini’s refusal to offer expected resolution is in the interrupted climax of the film, where the couple, having agreed to divorce, are pressed, uncomfortably, into going to Pompeii together. There they witness another couple, from the year 79 AD, buried in the rock, locked in a perpetual embrace, immobilised by the lava—this is the revelation which should force their reconciliation, but instead Bergman is overcome and taken ill. So we are forced to wait.

Rivette’s ordination of Journey to Italy as the first modern film is, in a philosophical sense, paradoxical, because in fact it is modernity itself which is being shunned, or at best broken down and humanized, by the film. Modernity is, after all, Sanders’s ruthless, Newtonian approach to their marriage—an outlook his wife believes she needs to achieve, but which her Rabelaisian stirrings prevent—as he insists, “why bother, when we know what the situation is between us” and lobbying her for a divorce. Yet the ultimate impact on the couple of their immersion in the world, revealing what they should have known all along—that they belong together—is nothing if not excessively, regressively romantic, and Rossellini (an atheist who was nevertheless fascinated with Catholicism) presents the final revelation as if it were part of a miracle, concluding that succumbing to less rational impulses was the only hope the Joyces had.

Rossellini’s own journey is two-pronged—back to his earliest preoccupation (Italy) but more markedly, towards a cinematic definition of realism (the observation of all facets of human existence, beyond those which drive plot) which is every bit as patrimonial as the moral quest for truth of his Rome, Open City and Paisà. If it feels at times like an unexplained mystery to watch, then that’s because subject-matter like this (marriage, separation, reconciliation) should. It might be as close as cinema gets to making sense of it.

Journey to Italy played June 22 and 23 at Museum of the Moving Image as part of Reverse Shot's See It Big series.